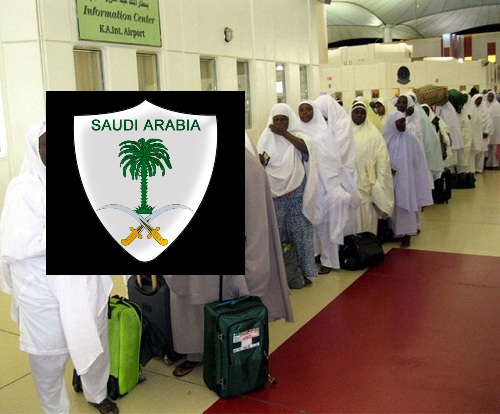 The deportation process began yesterday as Vice President Namadi Sambo  was meeting with the Saudi Arabian Ambassador to Nigeria Khaled O.Y. Abdrabuh in the series of diplomatic effort to resolve the impasse.

President Goodluck Jonathan had also approved the constitution of a Presidential delegation under the leadership of the Speaker of the House of Representatives Aminu Waziri Tambuwal to interface with the Saudi authorities over the issues surrounding the detained Nigerian female pilgrims.

The first batch of the deportees made up of 111 pilgrims from Katsina and 60 from Taraba arrived in Kano at about 4:55pm yesterday on board Max Air.

The Taraba pilgrims, mostly from Sardauna and Wukari local government areas of the state, were taken straight away to Kano Hajj Camp after alighting from the plane based on an arrangement at the instance of the National Hajj Commission of Nigeria (NAHCON), while those from Katsina were flown to Katsina aboard the plane.

In view of the deteriorating situation, NAHCON yesterday announced temporary suspension of all Hajj flights for the next 48 hours.

National Commissioner in charge of operations, Alhaji Abdullahi Muhammad said last night that the decision was reached after consultations with stakeholders.

Kano State Pilgrim Welfare Board had earlier said it had suspended further airlifting of intending pilgrims to Saudi Arabia. Executive Secretary of the board, Alhaji Laminu Rabiu said the decision was taken as part of efforts to address the current impasse between Nigeria and Saudi governments.

The pilgrims were denied entry into Saudi Arabia by the country’s officials for alleged failure to travel with their muharram (male relatives).

Our correspondent reports that some of the deportees looked tired and hungry on arrival, as they were boarding a waiting vehicle that would convey them to the hajj camp not far away from the airport.

Many of them narrated grim stories about their alleged maltreatment during their stay in Medina airport, saying they were left without food and in the cold since they were flown to the holy land.

They alleged that they were deported despite their wailing and pleas to the Saudi officials to allow them to carry out the religious ritual.

One of the deportees, Amina Jalingo spoke in tears: “We were held in Madina for two days without food. None of us could sleep because it was so cold. Most of us collapsed on the floor, sobbing and pleading after we were told that we would be deported. But our pleas fell on the deaf ears…Right now we are very hungry and tired”.

On her part, Aishatu Muhammad, claimed that she was turned back even though she travelled with one of her relatives.

“When we arrived in Madina, my muharram was allowed to pass freely, but my own passport was handed back to me by the Saudi officials. We don’t know what sort of male guardians the Saudis want us to present,” she asked.

“We are unhappy with this development because our opportunity to perform the hajj has been lost. The officials did not even consider our screaming and appeals,” she added.

Daily Trust also learnt that the returnees were brought back because the detention facilities where the initial 1,000 female pilgrims had been kept was so congested that they could not accommodate more pilgrims. According to unconfirmed reports, about 200 pilgrims among the 1,000 in detention shared a single toilet.

A source also told our reporter that when the intending pilgrims attempted to protest their deportation, the Saudi authorities sent troops to the airport in Medina to contain any situation.

Intending female  pilgrims from federal capital territory, Kogi and Niger states, yesterday expressed fear over what they described as unjust and unfair treatment of Nigerian women on arrival at Saudi airport.

Meanwhile Sheikh Ahmad Mahmud Gumi, yesterday said the treatment of the Nigerian female pilgrims in Saudi Arabia was caused by government’s incompetence as well as the indiscipline, which Nigerians exhibit in foreign countries.

Sheikh Gumi said the action of the Saudi authorities did not come to him as a surprise because of the way and manner female pilgrims conduct themselves while in the holy land.

“During the days of President Yar’adua, I have severally called his attention to the atrocities committed by our female pilgrims in Saudi Arabia. Some of them would go to the holy land and banish. They stay there to engage in acts that are not only against our religion but against even common sense and morality. I know the Saudis have respect for women but what our women do in the kingdom have made the Saudis to regard them as criminals. I once had an encounter with a taxi driver in Saudi Arabia who told me that if he were the president of Nigeria, he would make a law to stop all women between the ages of 15 to 50 from going to pilgrimage. This is to tell you how bad the situation is,” he said.

But renowned Kano Islamic scholar Sheikh Tijjani Bala Kalarawi also said yesterday that the issue of Murraham is untenable given the tradition that pilgrims from Nigeria are always under the care of government officials throughout their stay in Saudi Arabia.

He said “if at all there is a serious offence committed by the pilgrims, the Saudi authorities should categorically tell Nigerian government in order to take the next line of action but to say our female pilgrims are detained because they could not produce Muharram is untenable”.

Sheikh Kalarawi said unlike Umrah (the lesser hajj) which requires every intending female pilgrim to travel with her Muharram, the hajj proper is always a trip in groups where all the pilgrims including the females are strictly under the care of hajj officials at all government levels and it is an arrangement already known and accepted by Saudi authorities.