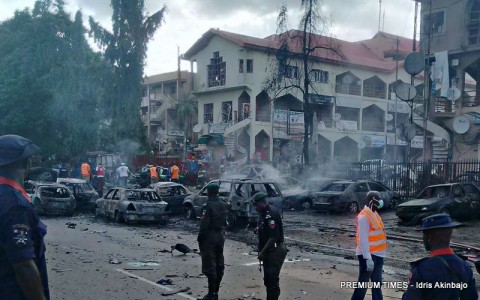 There was a bomb blast at the early hour of Wednesday at Nkutatu/Kara Market suburb of Onitsha in Ogbaru Council Area of Anambra, where 12 people reportedly got injured.

A reliable sources, according to Nigerian Tribune said that the blast occurred after a man left a local eatery five minutes after.

Source said that, “a man came to the eatery in the market with two jerrycans containing petrol of which he dropped one of the jerrycans at the entrance to the eatery and the other by his side as he ordered for a plate of rice.

The source said that within two minutes after taking a few spoons from the plate of rice, he pretended to be pressed and went out to ease himself and within five minutes he left, one of the jerrycans exploded injuring 12 people.”

The other one did not explode as some of the courageous traders rushed and remove the other to a safer place where the police came and picked it away,” he added.

Reacting to the incident, the Sarki of Onitsha, Alhaji Iliyasa Yashau, described the blast as unfortunate and commended the security operatives for their prompt intervention.

The deputy Commissioner of police in the state, Mr. J.B. Kokuma, who was handy after the incident declined to comment on the blast saying it is too early.

According to Nigerian Tribune, the Vice Chairman of Nigerian Red Cross Society in the state, Dr Peter Katchy said only eight people were injured.

He stressed the need for security to be beefed up in the market adding that it would help to know the strangers.

“It was a local bomb devise dropped in a crowded local market, the victims in the hospitals are being managed well, they are being taken good care of,” he said.