There is an ingrained value in every Muslim, man and woman alike, to pursue knowledge and to learn about God’s truth by studying the surrounding world. Prophet Mohammad (saws), advised his followers to seek knowledge wherever it can be found. In keeping with this value, Muslim women are continuing to make headway in the field of science and their graduation ratios often exceed those of western women in pursuing scientific degrees according to figures recently released by UNESCO{click for report}.

The report also suggested an impending new possible problem,- the reversal of the educational gender participation dynamic, with the disproportionately higher ratio of female to male college graduation recorded. This ratio is as high as 2:1 in most Western Nations, about even in Arab Nations and only in Sub Saharan Africa do we still have a male predominance over females, with ratios of 100 males to every 66 females.

With the observable gaps many Muslim nations now show over America and European Nations, seldom do positive depictions of Muslim women get portrayed by the western mainstream media. In some cases, media profit depends upon a production team’s ability to feed the myopic fantasies and stereotypes etched in the minds of many non-Muslims. Westerners are comfortable with stereotypes that Muslim women are oppressed because of Islam, which could not be further from the truth. The Islamic message, which stresses gender equity and rights for women, is often corrupted by competing cultural values that have no basis in Islam scripture.

The quest for knowledge has always applied to women in Islam. God has made no difference between genders in this area. The Prophet (saws) once said: “Seeking knowledge is a mandate for every Muslim (male and female).” (Sahih Bukhari)

During the International Congress on Muslim Women in Science Towards a Better Future, King Mohamed VI stressed that “…the integrated development of the principles of Islam and of scientific knowledge must be achieved irrespective of gender”, according to a UNESCO report on the gathering that took place in 2000.

Muslim women in science have become leaders in their fields, receiving awards, earning patents and making contribution that further man’s knowledge of the world, and yet the eyes of western cameras see through these women as if they do not exist. A tendency to avoid praise for Muslim achievements hides the seldom explored comparisons.

Rehab Eman, a Muslim woman with a Bachelor of Science in Architectural Engineering, and a Masters degree in Islamic Studies on Jerusalem credits Islamic values for what inspired her to pursue knowledge in a scientific field. Instead of holding Eman back, the Muslim men in her life, including her father and brother, encouraged her to work hard for her education. “My lecturers were men, my supporters were men, my sponsors were men. They believed in my talents…,” she shares.

Traditionally, Muslim women have not been discouraged in the sciences to the extent that Western women have, which might be why statistics show such high ratios of Muslim women graduates in science fields as a percentage to the total science graduate population. However, in Muslim countries the real hurdles that affect women’s education are the very same hurdles that affect men’s education. These hurdles take the form of poverty, illiteracy, political instability and the policy of foreign powers.

Data that explains the real problem can be found by comparing the total educated populations of countries and regions of the world. A high degree of illiteracy and low levels of secondary school enrollment account for why there are less graduates overall in poorer countries than there are in wealthier regions like North America and Europe. In locales defined by UNESCO in their recent report, gross secondary school enrollment ratios are very low: Africa (below 40%), West Asia (below 60%), and East Asia (below 75%).

While some Islamophobic pundits are all too ready to make a correlation between poor education and what type of religion one practices, more accurate relationships can find their foundation in hard figures. National wealth and education forge a tight relationship. According to data from the UIS (UNESCO Institute for Statistics), national wealth is directly related to educational enrollment. Statistics show that the vast majority of medium-high and high income countries have a secondary school enrollment ratio above 90 percent. Poorer countries don’t have the resources needed to make education a priority. Undoubtedly, the next question that gets asked is, “How do countries become poor?” Well, to the dismay of many hostile to the deen, poverty and Islam cannot be correlated any more successfully than illiteracy and Islam. While there is more than enough scriptural proof that Islam encourages education for both men and women, some fail to realize that when the disease of poverty attacks, it does so in disregard to any cultural or religious boundaries. 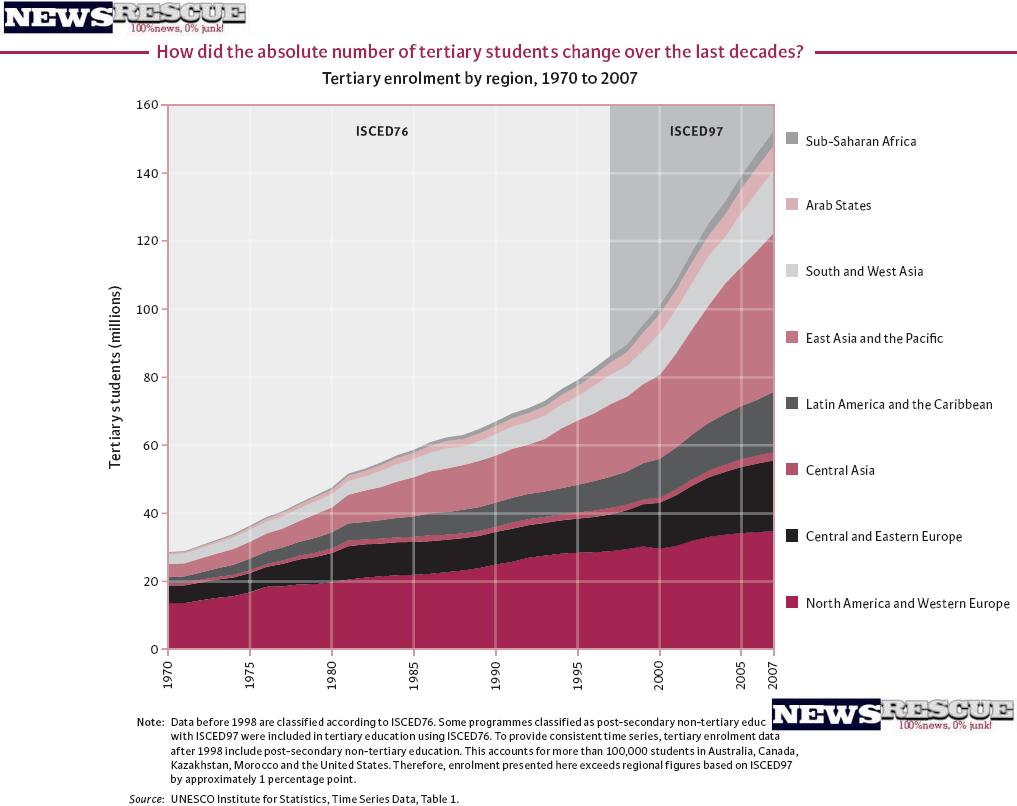 Although there are obstacles to education in much of the non-Muslim world today, the Muslim world has endured some of the most hostile attacks in recent decades, which has affected the overall quality and safety for youth trying to obtain education. In war torn Afghanistan and Iraq, schools of all levels have been bombed and shelled by U.S. military forces. Public health is in jeopardy and infrastructure has been damaged and not rebuilt.

When state-sponsored super-power terrorism isn’t being waged on weaker civilian populations, a form of quiet economic warfare is being waged behind a smokescreen of Public Relations razzle-dazzle by organizations like the IMF and World Bank, the culprits responsible, in part, for increasing third-world national debts and hitting other nations’ education systems like a home run out of Yankee Stadium.

A self-proclaimed Economic Hit-Man, John Perkins, former Chief Economist for Chas. T. Main, confesses in a radio interview with Amy Goodman that his job was to build the American Empire by increasing other countries’ national debt by using any means necessary.

“This empire, unlike any other in the history of the world, has been built primarily through economic manipulation, through cheating, through fraud, through seducing people into our way of life, through the economic hit men. I was very much a part of that,” says Perkins.

Gender inequity does exist, but it is not relegated to Muslim countries. Some disparaging gender gaps in higher education exist where the religion of Islam isn’t even practiced by a majority of the population. For example, only 44% of people enrolled in higher education in Switzerland are women, Guatemala (43%), Rwanda (37%), Korea (36%), Bhutan (34%), Cambodia (29%) and Liechtenstein (27%).

On the other side of the coin, in Tunisia, a country where 98% of people practice Islam, there were 5% more female students enrolled than males in higher education. Malaysian women made up 55% of the enrolled population in higher education, Lebanon (54%), Jordan and Libya (51%). Bahrain even exceeded the United States in the ratio of women enrolled in higher education by 6%. If education is freedom, then it looks like Muslim women in Bahrain are more liberated than American women.

Rather than Islam threatening a woman’s right to education, governments hostile to Islam often set up roadblocks to prevent Muslim women from obtaining education. Both France and Turkey are guilty of this type of exclusionary persecution, all under the false guise of secularism. According to Human Rights Watch (HRW), a prestigious nongovernmental organization, these bans exclude thousands of women from institutions of higher learning each year. A 2004 HRW report states, “This restriction of women’s choice of dress is discriminatory and violates their right to education, their right to freedom of thought, conscience and religion, and their right to privacy.”

Despite the fact that the Muslim woman is constantly being harassed about her choice in religion and must withstand relentless western media stereotypes that ridicule her faith and demonize the men of her culture, there exists an Islamic tradition celebrating women in science of which Muslims must remind the world. Today, the Islamic culture in which women are encouraged to participate, excel and lead in scientific fields continues to express itself, not only through statistical data, but in real, living, breathing and praying people. Although these women are exceptional, they are by no means the exception to the rule.

Professor Islam was nominated as a distinguished Scientist of the World For the Year 2000 by UNESCO. She made significant contributions in drug safety by defining the Saudi profile for drug metabolism. She has held several academic leadership posts in her own country as well as international diplomatic posts with the World Health Organization. Professor Islam has also been a key figure in building academic infrastructure, beginning in the ’70s, to support women studying science in higher education in Saudi Arabia.

Recently at the international Workshop on Machine Learning in Canada, Samira Shah, presented an innovative algorithm in computerized cognitive leaning that she and a team of colleagues developed at IIT Delhi, India. Her previous academic contributions include a “Global Optimizer” for which a patent is pending. She is currently pursuing a doctorate degree from IIT Delhi.

Dr. Siddiqui has made significant contributions to medicine and agriculture through her study and classification of indigenous plant materials. She has been awarded several patents for anticancer constituents and biopesticides and has written more than 250 research articles. Pakistan Academy of Sciences elected her as a Fellow and she co-founded the Third World Organization for Women in Science. She received her Ph.D. and D.Sc. from the University of Karachi, Pakistan. She has been honored with several prestigious awards including the Khwarizmi International Award of Iran and Salam Prize in Chemistry.

Historic records show that women participated in science and medicine in Muslim societies. By contrast, in America, during the 1890’s women could not be doctors, and yet, Muslim women doctors were seen as equals to their male counterparts hundred’s of years earlier, they were even responsible for written contributions in the field. Also, women like Ijliya, an astrolab builder, were employed as skilled scientists in Muslim courts. Others made progress in pharmacology like Ishi Nili

Seeking knowledge is one of the most rewarding ways to connect to Al-Alim (The All Knowing) besides prayer. The believing faithful hold a deep love for Allah in their hearts. Perhaps it is this deep love that inspires believing men and women to strain and reach with their minds, through scientific learning in order to bring themselves closer to the One to whom they are so thankful.

“Iqra!” (read) was Allah’s first command to Mohammad (peace be upon him) and its implications are numerous to Muslims living today. Read, be literate, seek and learn, discover and use the gifts and talents that Allah has granted us above animals. Use the mind to move closer to Al-Haadi (The Guide), as the Muslimah scientists have done in the past and are doing today.

WOMEN GRADUATES IN SCIENCE AND ENGINEERING

The data for years 2002/2003 contained in these tables describes the percentage of women graduates in science and engineering out of the total science and engineering graduate population in each country, and pertains to higher-education in science (life sciences, physical sciences, mathematics and statistics, computer sciences) and Engineering (engineering and engineering trades, manufacturing and processing, architecture and building) fields in countries with Muslim majorities for which data was available. (Statistics from the “Global Education Digest” report released from UNESCO Institute for Statistics 2005)

Corey Elizabeth Habbas is a a freelance writer from St. Paul, Minnesota, US