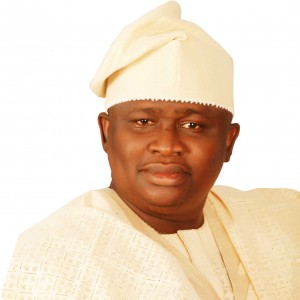 The chairman of the House of Representatives Committee on Public Accounts, Hon. Solomom  Adeola  who is the All Progressives Party (APC) senatorial candidate for Lagos West has stated that the 2015 general elections present a great opportunity for Nigeria to deepen its democracy and good governance at the national level by electing an opposition party for the first time take the reign of power as is obtainable in other democratic countries of the world.

The legislator aspiring to represent the largest senatorial district in  Nigeria stated this at the inauguration of his 110 member campaign committee to complement the effort of the party in Lagos State adding that the work of his team is to ensure that the party’s candidates emerge  victorious at all levels in the February election.

Hon Adeola said it is heartwarming that the average Nigerian is now very conscious of their political environment and can place the bane of mis-governance at the doorsteps of the ruling party PDP adding however that his team should not be complacent as the ruling PDP are up to various antics to shortchange the aspirations and will of the people.

Earlier on Alhaji Abdulahi Enilolobo, the APC organizing secretary in Lagos State said Hon Adeola is a credible candidate with a track record as a legislator that had performed both at the state and federal level adding that anyone that backs Adeola will be proud of having effective representation in government as well as other benefits.

He said the campaign would be issue based as all the committee members need to do is to ask potential voters to answer the question of how their lives has been improved or otherwise under PDP rule in the last 15 years in any sector of life.

Among those present at the inauguration are Mrs. Olabisi Adebajo, the state ex officio of APC in Lagos, Alhaji Ahmed Kabiru, the chairman of Arewa Community in Lagos State among other supporters the senatorial candidate.