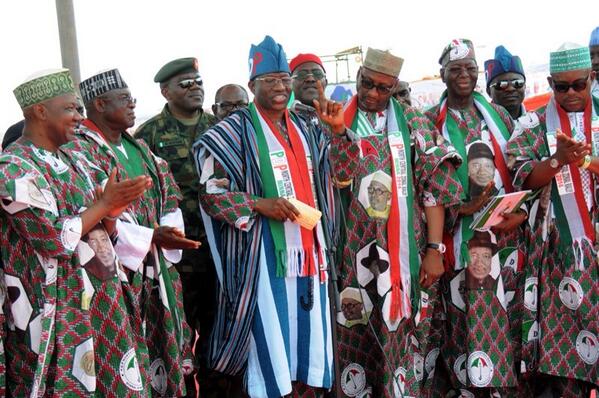 •automatic second term tickets for those running first term in office; and

•automatic senatorial seats for governors aspiring to be in the Senate.

Although Jonathan is set to emerge the sole presidential candidate of the PDP, all is not well within the party on how to meet the demands of the governors, a source told The Nation.

Some of the governors are threatening protest votes in their states if they are not allowed to have their way.

PDP National Chairman Adamu Muazu is said to be battling to manage the situation.

Muazu, who is opposed to automatic tickets, has to devise means of accommodating the agitation of the governors, a source said.

There has been disquiet in the party on the demands of the governors.

A governor said: “All the governors are united in their demands to have a say on who will succeed them and second term tickets for their colleagues who still have the opportunity of another term in office.

“They said if the President can enjoy automatic second term ticket, it should spread across the board.

“The party is thinking that such a development will shut out other good hands in the party.

Responding to a question, the source said: “The likelihood of realignment of forces and protest votes cannot be ruled out.”

Another governor said there was no way the party would not make concessions to allow the second term ticket of the President to sail through.

“The PDP leadership may say there is no automatic ticket but there will certainly be negotiations to make certain things to work. Mark my words, the PDP governors cannot allow Jonathan to have his way without anything in return. This is politics,” said the governor, who requested not to be named.

“We are back to the 2003 era when ex-President Olusegun Obasanjo wanted the second term ticket. Governors want to be politically relevant after leaving office and fairness demands some concessions.

“We have been making our demands known to the party. We hope it will accommodate these agitations to keep the party intact for 2015 poll.”

The National Publicity Secretary of PDP, Chief Olisa Metuh, was unavailable last night. His mobile lines were switched off.

But the National Chairman of PDP, Alhaji Adamu Muazu had on January 28 declared at the National Assembly that there would be no automatic tickets for members seeking offices in 2015.

Muazu spoke at a session with PDP members in the National Assembly.

At the meeting were Uduaghan, Imoke, Shema, Yero, Aliyu and Orji.

Muazu said automatic tickets were only given by parties that were undemocratic.

“We have a democratic process and we will go through that; those that deserve it will surely get it,” he said.

Muazu stressed that he inherited no records of any promise made by the immediate past national chairman of the party, Bamanga Tukur, of giving automatic ticket to any member.

A member of the NWC, who spoke last night, said: “Neither Muazu nor PDP has changed its position; there will be no automatic ticket for any member in 2015.

“I can tell you that our position against automatic ticket has not changed.”