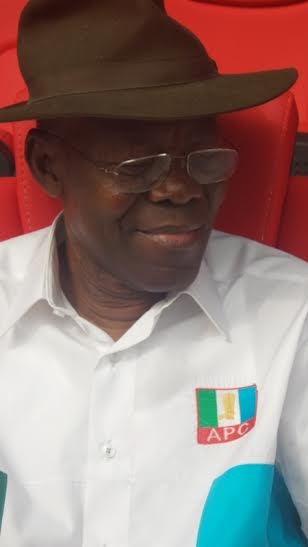 The Rivers State Chapter of the All Pro­gressives Con­gress (APC) has told the opposition Peoples Democratic Party (PDP) in the State to get ready to surrender the only senatorial seat in its possession. PDP currently has one of the three Senators from the State in the person of Senator George Sekibo but Rivers APC in a statement issued Monday in Port Harcourt said it is determined to take that one as well during the February 14 National Assembly elections.

“PDP does not deserve the senatorial seat presently in its possession. In any case, Senator Sekibo has failed to represent Rivers East well enough at the Senate, so he should prepare to surrender it on February 14,” Rivers APC said in the statement signed by its Chairman, Dr. Davies Ibiamu Ikanya.

The party described its candidate, Hon. Andrew Uchendu, as being by far better than Sekibo, saying: “Uchendu is a politician’s politician and an outstanding three-time member of the Federal House of Representatives. He is poised to retire Senator George Sekibo during the forthcoming National Assembly polls.”

Rivers APC declared that incumbent Senator Magnus Abe will easily retain his seat as Senator representing Rivers South-East while Speaker of the Rivers State House of Assembly, Rt. Hon. Otelemaba Amachree, will have no difficulty winning the Rivers West seat currently occupied by APC’s Senator Wilson Ake, who is about to serve out the two terms zoned to his area.

“Senator Abe and Senators-in-waiting Uchendu and Amachree are the best the State can boast at the moment with regard to the Senate. They are unbeatable and we trust the electorates to do the right thing by voting massively for them on February 14,” Rivers APC said.

Below is the profile of each of the APC senatorial candidates:

Distinguished Senator Magnus Ngei Abe: Currently the Senator representing the South-East Senatorial Zone, Senator Magnus Abe is a lawyer by profession, an administrator par excellence, a political strategist of repute, an information expert and the best Commissioner for Information ever in Rivers State. Abe entered politics in 1999 when he was elected into the Rivers State House of Assembly, serving as Minority Leader. In 2003 he defected to PDP, and from 2003 to 2007 he was Commissioner of Information in the administration of Governor Peter Odili. When Governor Rotimi Chibuike Amaechi entered office in May 2007, Abe was appointed Secretary to the Rivers State Government. He resigned to contest for the position of Senator for Rivers South-East, which he won. He is Chairman of the Petroleum Downstream Committee and member of the National Population & Identity Card Committee in the Senate.

Hon. Andrew Igbonule Uchendu: A 1992 recipient of the Federal Government National Productivity Merit Award, the highest honour that can be conferred on any Worker in the Public Service in Nigeria, Hon. Uchendu was in 1994 drafted into politics by the Ogbakor Ikwerre Cultural Organization. He represented Emohua, Ikwerre and Obio/Akpor LGAs at the 1994/1995 National Constitutional Conference. One of the best members of the House of Representatives, Hon. Uchendu has moved six crucial motions, namely, Ogbakiri crises, Rehabilitation of the East/West Expressway, the Establishment of the Oloibiri Oil Museum, Youth Unemployment and Youth Restiveness in Nigeria, Insecurity in the Niger Delta and the Invasion of the Rivers State House of Assembly by Hoodlums. He has in addition, sponsored three fundamental Bills in the House. They are the Standard Tendering Procedure for the Award of Contracts in the Public Service (popularly known as Due Process), the National Youth Development Programme and the Amendment to the Petroleum Technology Development Fund Act.

Rt. Hon. Otelemaba Daniel Amachree: He is not only currently Speaker of the Rivers State House of Assembly but also the longest serving member in any State House of Assembly in Nigeria, having served his constituency a record four times, from 1999 till date. Rt. Hon. Amachree’s contribution to the nationally acclaimed stability of the Rivers State House of Assembly since 1999 is legendary. He has at various times served as Chairman, House Committee on Commerce and Industry, Chairman, Committee on House Services, Chairman, House Committee on Local Government Chieftaincy and Community Affairs as well as Chairman, House Committee on Energy and Natural Resources, in which capacity he initiated the epoch-making Port Harcourt International Oil and Gas Conference, which third edition was recently organised by the House with unprecedented multi-national participation. Rt. Hon. Amachree has also been elected Chairman, South-South Speakers Conference in recognition of his leadership acumen.

With this calibre of representations, the Rivers State can be assured that their feelings and interests will be highly protected and guided jealously.