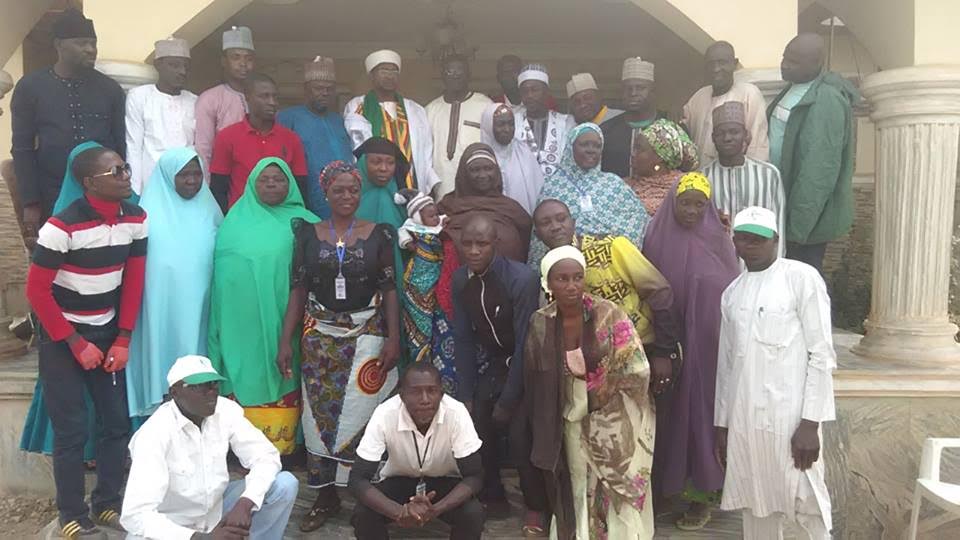 Ash Wednesday marks the beginning of 40 days Lenten season of fasting and prayer by catholic Christians round the world, and indeed an appeal was made by Muslim clerics and youth organization to Nigerian Christians in which were urged to use the opportunity in Tripling up effort in their daily prayers, to pray for peace and stability in the country ,and also to used the advantage of period ,to pray for quick recovery of health challenges of Mr. president

Mallam Gambo Abdullahi who lead a delegation of Muslims youth to pastor Yohanna Buru House this morning ,in other to felicitate with him and Christians round the world over the commencement of the 40 days fasting period said,” the Lenten period is a very special Holy season to all Christians all over the planet, adding that we as Muslims who usually do 30 days fasting during Ramadan, know the importance of fasting and prayers to Almighty God“That is why we came as a team to felicitate and wish all Christian success from the beginning of the holy month till the end.”

The beginning of the holy month, indicate the sign of plenty blessing thought out the 40 days and While calling on all Christians over the world to stay away all the bad things that could cause them sins at this holy season, he then urged Christian fellows to rededicate their lives to Bible studies and serious prayers and all-nights, in order to achieve their blessings. And urged them not to forget to pray for Mr president.

Gambo said to encourage and strengthening peaceful co-existence and religious tolerance between different faith organizations in Nigeria, we must be our brother keepers, through appreciating and encouraging one another irrespective of our religious differences, in other to make the country move ahead.

According to him, Lent is the period of preparation for Holy Week and Easter, and “it’s a very important seasons for dedication to worship the Lord.” Some churches hold the custom of making ashes from the palm crosses of the previous year. These ashes are used to mark the foreheads of worshipers at a Mass on Ash Wednesday of the year.

Gambo said we are appealing to Christian all over the world to pray for God intervention in Areas like southern kaduna,North-eastern Nigeria, and all the African countries that faces problems of insecurity , so as to end all forms of ethno-religious ,politician ,Terrorism and extremist activities bedeviling peace stability in African region and the world at large ,adding that this can be achieved through total dedication and ceaseless prayers embark by the worshipers through making used of the holy month fasting and prayers.

Mallam Gambo pointed out that, the importance of prayer cannot be overemphasized during the season, “and that is why we as scholars are calling on all Christians around the world to triple -up their efforts in prayers at this holy month, so as to get plenty blessings,” and called on God to intervene in solving all the problems confronting peace and stability in Africa and some parts of the world.

The Muslim cleric note that during our holy month of Ramadan, many Christian clerics wish us success for our 30 days’ fast, we also came to extend the same thing to our brothers; we are from one family, Adam and Eve, and we all worship one God, we all believed in paradise and Hell and we all believed on the day of resurrection, therefore, lets us all keep on living in peace and harmony with one another and learnt to accommodate and tolerate each other in order to make our country great.”

While Responding Pastor Yohanna Buru, who is General Overseer of Christ Evangelical Intercessory Fellowship Ministry, thanked the Muslim teams for the visit and said “During the Ramadan, we as Christians normally goes to prisons and bail out many Muslim inmates to go home and do their fast with friends and families every year, and we have been doing that for many years;so as to strengthening peaceful co-existence between the two  faith based organizations.

Buru also stated clearly that we also do visit top Muslim scholars in their places of worship to attained their Tafsir and then later join them in breaking Ramadan fast together at their mosques and sometimes at home – all with the sole aim of promoting peace and religious tolerance.”

The Christian cleric said, we as Christians duly respect your holy month of Ramadan and really know what prayer can do, and that is why we usually cooked good food and drinks and then share it to the needy like destitutes including those affected with various crisis Internally displaced person IDPs,and those living in penitentiary.

While calling on collaborative effort of promoting peace among Muslims and Christian communities across the country, The Pastor then appealed to both faith organization C..A.N and JNI and traditional believers to find means of encourage peace education in both schools and various community level in order to make Nigeria great.