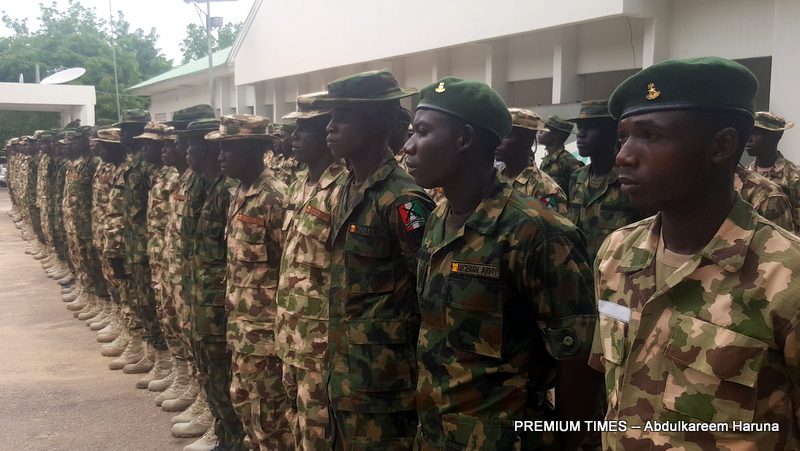 A total number of 250 ex-members of the youth vigilante, Civilian-JTF, who had been supporting the Nigerian military in the fight against Boko Haram, have concluded military training and have been fully inducted into the Nigerian Army.

The newly-recruited troopers on Friday stormed the Government House Maiduguri, on a “thank you” visit to the state governor, Kashim Shettima. They appreciated Mr. Shettima for helping them to be enlisted into the military.

The new soldiers, all clad in their combat fatigues, marched into the government house amidst cheers from their fellow Civilian-JTF members.

Benjamin Solomon, the leader of the team and commander of the parade, addressed the governor at the government house.

“We are here to say thank for making us become soldiers of our great country. We thank the president and we thank our father, the Chief of Army Staff, who ensured that we are soldiers today,” said Mr. Solomon.

“We are very many in the state and we are pleading that others too be given the same opportunity to become soldiers as well. We also have graduates among us who could also be given an opportunity to serve as officers of various military and paramilitary services. To us, it is now time to serve our country by laying down our lives to protect its territorial integrity”

“The emergence of the Civilian-JTF is a game changer in the fight against Boko Haram,” said Governor Shettima.

“One major issue that needs to be reported is the once strained relationship that existed between the people of our states and the military. But with the emergence of the Civilian-JTF the relationship became cordial. When the historical epoch of the Boko Haram insurgency is being written, the Civilian-JTF will have a chunk place of recognition.

“Today the one time stick-carrying youths have now become a thing of fear to the well armed Boko Haram who fear them more than even the conventional military.

“I thank the president of the country, and the Chief of Army Staff, Lieutenant General Tukur Buratai, for helping us to absorb our gallant youth into the Nigerian Army. We are not going to stop at this; we are not going to get tired in going after all the service chiefs as we are going to keep knocking on their doors until all our Civilian-JTF members are into various military and paramilitary outfits.

He called on the soldiers to be proud ambassadors of Borno State.

“Don’t bring us shame while you are out there serving the country. We would have preferred all of you to be deployed to Borno state; but since you are the Nigerian Army soldiers and not Borno soldiers, we bid you to go to wherever you are posted and deal with all enemies of the country the way you dealt with Boko Haram terrorists,” he said.

Earlier, the state attorney general and commissioner of justice, Kaka Lawan, had said that other batches of the Civilian-JTF would soon be absorbed into the Nigeria Police and other agencies.

He said 30 of the youth vigilante had already been taken by the Department of State Security (DSS) as junior personnel.