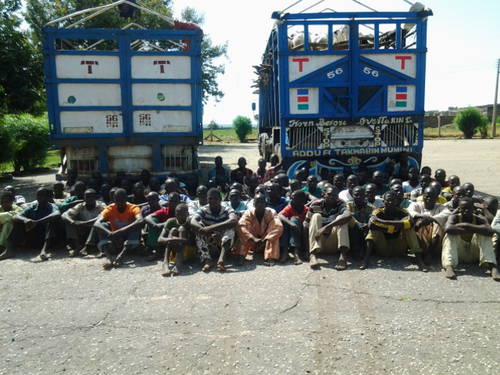 No fewer than 300 Boko Haram fighters have surrendered in Nigeria’s neighbouring country Cameroon in the past three weeks, Cameroon’s defense ministry has said.

According to the country’s military spokesman Lt. Col. Didier Badjeck, the Islamist militants gave up their arms and asked for asylum in Cameroon.

Badjeck added that the fates of the terrorists are yet to be decided.

It would be recalled that fighters from neighboring Cameroon, Niger and Chad have been identified recently fighting alongside Nigeria’s homegrown Boko Haram sect.

The insurgents have in recent weeks attacked border towns and villages in Cameroon.

Boko Haram had seized a string of towns and declared an Islamic caliphate in northeast Nigeria before the Nigerian military started recording victories with air and ground attacks that have resulted into 135 Boko Haram fighters also surrendered to Nigeria’s army.

According to the Nigerian Defense Ministry, about 135 insurgents surrendered Tuesday night, some at Buni-Yadi some 200 kilometers (125 miles) west of Konduga and others at Michika, 165 kilometers (100 miles) south of Konduga.

It was gathered that several militant commanders were among the dead including Mohammed Bashir, whom the Nigerian military identified as a double who posed in videos as Boko Haram leader Abubakar Shekau.

The military has claimed Shekau was killed in battle last year.