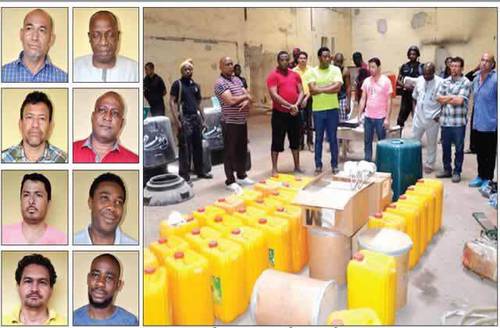 Operatives of Nigeria’s anti-drug agency the NDLEA have stumbled on a giant methamphetamine laboratory that can produce $2 billion worth of the drug.

The laboratory was in Asaba, Delta state.

Eight persons, including four Nigerians and Mexicans were arrested with 1. 5 kilograms of the drug with street value of $ 1million .

One kilogram of Methamphetamine according to the NDLEA is valued at $600, 000 street price .

This super methamphetamine laboratory according to the NDLEA is similar to the ones found in Mexico with capacity to produce between 3,000 to 4, 000 kilograms in per production circles .

If the suspects had completed the production circle at the illicit factory in Asaba, the drug would have had street value of $2 billion.

NDLEA Chairman and Chief Executive, Col. Muhammad Mustapha Abdallah said the super laboratory was discovered by the special enforcement team of the agency.

He said the Nigerians arrested are believed to be joint owners of the laboratory and four Mexicans who are methamphetamine production experts hired as technical partners into the country.

Abdallah described the operation as technical undercover assignment leading to the dismantling of a drug trafficking organization.

“A significant feature of this laboratory is that the production process is more technical and sophisticated because it uses the synthesis method of methamphetamine production.

All the principal actors linked to this illicit act were apprehended in a simultaneous raid on members of the drug syndicate in Lagos, Obosi in Anambra state and at the laboratory in Asaba, Delta state” Abdallah stated.