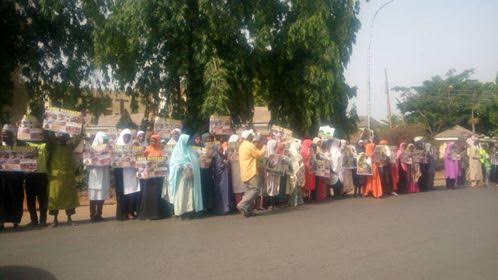 The leader of the Islamic Movement in Nigeria (IMN) Sheikh Ibraheem Yaqoub Zakzaky and his wife Malama Zeenat Ibrahim have been in detention without any charges for the past 490 days which is a contravention of all known laws within and outside Nigeria as well as the Nigerian Constitution.

Their illegal detention followed an attack by the Nigerian Army on their residence on the 12th to 14h of December 2015 during which they were severally shot and injured, three of their sons were murdered in cold blood by the soldiers, several people were burned alive including an elder sister of the IMN leader and his nephew, while the residence was set ablaze.

This ugly terror-laden attack perpetrated by the Nigerian Army led to another illegal act in which the victims of the massacre were buried in mass graves across the state, some of who were buried alive all in contravention of religious laws, local and international laws as well as the Geneva Convention.

Following these crimes against humanity perpetrated by the Nigerian regime, a court of competent jurisdiction, the Federal High Court in Abuja issued an order for the release of the couple along with compensation, provision of a residence as well as a police protection.

In what appears to be a tradition of the current Nigerian government which is known for its poor human rights records, the government has refused to obey the court order thereby setting a bad precedence in total disrespect of the judiciary and disregard to the Constitution of the Federal Republic of Nigeria.
It is against this background that we have gathered here today to call for the immediate release of Sheikh Ibraheem Zakzaky and his wife from illegal detention as we call on the Nigerian government to obey the court order.

We are all aware that as a result of the brutal attack by the army, Sheikh Zakzaky was left with life threatening injuries and has lost one of his eyes while the other is left uncared for by the government for which he requires urgent medical attention.

We call on all Nigerians and lovers of humanity to rise against oppression and misuse of power and lend a voice to justice and fairness by condemning such acts of unprovoked brutality on innocent unarmed civilians that include hundreds of women and children perpetrated by the Nigerian government in abuse of all democratic tenets and in violation of the Rome Statute of the International Criminal Court (ICC).

On a final note we reiterate our call for the immediate and unconditional release of our leader Sheikh Ibraheem Zakzaky and his wife Malama Zeenat Ibrahim. Nigerian government must respect court order and desist from running governance with impunity, oppression and fascism.