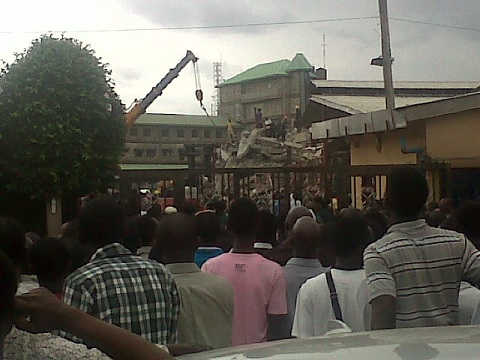 No fewer than 50 persons have been feared dead, with several others injured during the collapse of a six-storey building in the Synagogue Church of All Nations in Ikotun, Lagos on Friday.

A correspondent of the News Agency of Nigerian at the scene reports that ambulances were seen taking people out of the collapse building to the Isolo General Hospital.

There had yet to be an official confirmation of the number of casualties.

Policemen were on the ground dispersing crowds, who were gathered outside the gate of the collapse building.

An eyewitness, who spoke to NAN on anonymity, said that the building collapse at around 1.30pm.

He said the building, which usually serves as a guest house for some foreigners and people from the neighbouring African countries, was completed four months ago.

”We were all surprised with this incidence. At around 1.30pm, the building collapsed while people were inside.

“This building was a four-storey building but it was converted to seven,” he said.

LASEMA officials were denied access into the premises of the church while journalists were also chased away from the scene of the incidence.

People, who attempted to take pictures of the scene were harassed by members of the church.