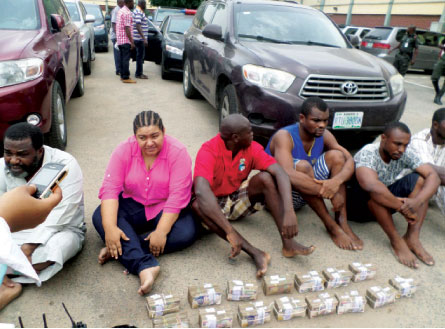 Six persons who allegedly operate as personnel of the Economic and Financial Crimes Commission(EFCC) have been arrested in Lagos.

The suspects were arrested by the operatives of the Special Anti Robbery Squad, Lagos State Police Command, led by Abba Kyari, a Superintendent of Police.

The suspects are Princewill Eze who goes by the name of Senator Nwobodo. The 55 year-old Eze is the gang leader.

Others are 32 year-old Amira Abdallahi, a Lebanese lady whose mother is from Edo State, Daniel Okpara alias Dankwa, 30,

Exhibits recovered from the suspects include,  Bryco 59 Pistol with Serial No. 930945 with six rounds of 5.56MM live ammunition.

Commissioner of Police, Lagos State Police Command, Kayode Aderanti who paraded the suspects at the headquarters of Lagos State Police Command on Wednesday said that on 25th February, 2015 at about 5 p.m., he received a tip off that  a gang of armed robbers who uses EFCC Uniforms,  handcuffs and  guns to rob bureau de change operators in Abuja and Lagos State of foreign currencies including Dollars, Pounds Sterlings and Euro were sighted on the prawl.

The CP stated that he  immediately directed the 0/C SARS  SP  Abba kyari to launch a massive manhunt and round up the criminals.

Thereafter, he continued, the  0/C SARS swiftly deployed cutting edge technological tools on ground and eventually tracked and arrested the kingpin one Princewell Eze,  a.k.a Senator Nwobodo  who lives in VGC, Ajah on  27th February, 2015 at about 4p.m.

He disclosed that the  confession of Eze  led to the arrest of a female Lebanese Nationale and gang member, one Amira Abdallahi,  Daniel Okpara  a.k.a Dankwa,  Paul Irior,  37yrs who is a dismissed Police Corporal, Bassey Williams Ekpenyong,  39yrs who was charged to Court by SARS for kidnapping in 2012 and one Royal Nwabuike.

The CP narrated how the suspects were arrested in Delta, Abuja, Ogun and Lagos states, adding that  they all confessed to several robberies within Lagos and  Abuja.

“Also during the follow up, one Bryco 59 pistol with S/No. 930945 with six rounds of 5.5.6mm live ammunition, one single barrel pistol cut to size with four rounds of live   cartridges, about Four Million Noire (N4000,000.00) cash, Thirteen Thousand US boilers ($13,000), three (3) exotic Highlander Jeeps, one Toyota Sienna, one Toyota 4 runner jeep and  Toyota Camry Car which the suspects procured with the proceeds of robbery escapades  have been recovered. Also the ring leader Princewell Eze built a hotel in Edo  State while other members built houses in Delta, Ogun and Lagos States”, he revealed.

Meanwhile, the CP assured that  serious efforts are on going towards the arrest of the only gang member at large.

“The Command wishes to use this opportunity to enjoin all Lagosians to keep on availing us of credible information and actionable intelligence. Once again we want to assures Lagosians that the command has put in place  adequate security arrangements to ensure the safety  of lives  and properties”.

A 32-year-old nursing mother, who was caught for alleged armed robbery in  Lagos,  has blamed her plight on the huge financial burden on her.

According to the  Lebanese woman,  who identified herself as Amira Abudallahi, “my financial responsibility and the economic situation of the country led me into armed robbery”.  “I have five kids but I am divorced.  I just had a baby.  The  baby is six months old now. Since I started working with the gang, I have made over N12 million. I used part of it to buy a car and the other to pay my children’s school fees,”  she said after being paraded by the Lagos State Police Command.

“I am not proud of myself neither am I proud of what has happened. I just hope I can make a positive change on the society.  I pray God will give me the opportunity to do so in  future. I believe no one is above mistake and I believe  God will grant me  the grace.

“ What I did was wrong, but  nobody is above mistake. It was my financial responsibility and the economic situation of the country that led me into the gang. I live in Lekki. What I do for the gang is that I talk  with prospective victims on the phone. Senator gives me the number, tells me what to say and then I call the victim. I have not built any house; I still live in a rented two-bedroom apartment in Lekki”.

Amira  was alleged to be  a member of a six-man armed robbery gang  which specialised in impersonating operatives of EFCC to rob bureau de change operators  in Abuja and Lagos.

Lagos State  Commissioner of Police,  Kayode Aderanti, while parading the suspects, said that, on February 25,  at about 5pm, he received information about a gang of armed robbers  using the  EFCC uniform  and  handcuffs to rob bureau de change operators in Abuja and Lagos of  dollars,  pounds sterling and Euro.Other suspects are  Princewill Eze, aka Senator Nwobodo, 55; Daniel Okpara, 30; Paul Irior, 37; Bassey Williams Ekpenyong, 39; and Royal Nwabuike, 32. They were arrested in Lagos, Ogun, and Abuja respectively.

Aderanti subsequently asked the state Anti-Robbery Squad (SARS) commander,  Abba Kyari, to launch a  manhunt. The manhunt paid off as  detectives tracked and arrested the suspected gang leader, Senator  Nwobodo,  in Ajah on February 27,  at about 4pm. His alleged  confession led to the arrest of  Amira  and other members of the gang.

The  suspects were said to  have a complete  set  of communication system of the police  inside  a  vehicle which allowed  them  to intercept police  communications. They also reportedly had  police escort vehicles, police walkie talkie, EFCC vest used impersonate the anti-graft agencies  officials.

Confessing to the crime, Eze  said, “I didn’t recruit anyone of them into the gang; they all joined the gang on their own freewill because they are all adults. I am from Ikanu lGA, Enugu state. I am married with five children. I was into hospitality business before I ventured into robbery.  The senator name is an appellation. I did not hold a political position. I live in a rented apartment at VGC. I did not own the house. Some of my daughters are in school abroad.

“We have made about N15m. I have used the money to buy different property, but the police have seized them all. I bought different vehicles”.

Another member of the gang, a dismissed police officer, Paul Irior,  said: “We  were not using  guns. I was serving with CMS Mopol 2, Lagos. I built a house in Benin. I met the senator in 2014. My role was to act as policeman. I  would  wear uniform and pose with the fake EFCC officials. Any time they had a deal, they invited me. Sometimes, I got a million per operation.

“They would bring the money to us in convenient places like hotels and banks. I also run a hotel. It is about five years now that we started the deals. I was arrested by the police four years ago for a similar issue, but secured bail  by the  court.

Lagos State Police Command spokesman,  Ken Nwosu, said efforts were on to  arrest  the only gang member still at large.