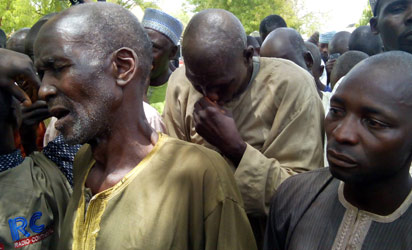 Pogu also revealed that a total of 229 natives/residents of Chibok have been killed since Boko Haram’s April onslaught on the only secondary school in the community, while more than 70 have been injured.

He said that in all the attacks, houses, shops, foodstuff, churches, vehicles, belongings, Chibok market, LGA secretariat and motorcycles were either burnt or carted away.

Lamenting the fruitless efforts of the government at rescuing the girls and returning normalcy to the community, Pogu said: “While this unfortunate situation persists, many distressed parents are dying of heart attack and frustration, as their dejection has become unbearable. On record, 7 parents have lost their lives due to the trauma of the situation.

“With this development, the Chibok nation wishes to categorically state that the inability or unwillingness of the federal government to provide adequate security to Chibok nation following the abduction of the girls leaves us with no option but to call on the United Nations to use its apparatus to come to our aid and protect us from the imminent annihilation as a people.”

However, in a reaction to the statement of the community leader, director-general of the National Orientation Agency (NOA), Mike Omeri said “the government is doing its best to protect the community.”

Aside being the location of a large-scale Boko Haram abduction in April, Chibok  and its neighbouring villages have recently been the target of terrorist attacks.