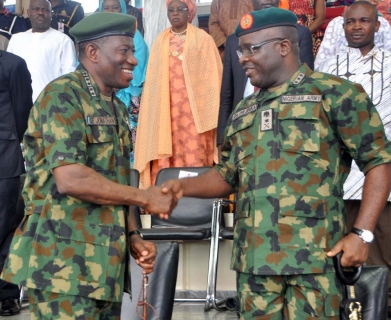 Nine serving Generals in the Nigerian Army and other senior military officers are now under investigation for their alleged role in the sale of arms to members of the Boko Haram sect.

They are also fingered in the movement of weapons and Army armouries in some northern states.

A top security chief confirmed to Nigerian Pilot yesterday that the military authorities had made progress in the investigation of the affected Army officers, adding that they would soon be court-martialed.

He said the delay in their arraignment before a military court was because of the concentration of activities on how to rescue the abducted schoolgirls from Chibok, Borno State by Boko Haram sect.

According to the source, some detained Boko Haram suspects allegedly named the Generals and other military officers as supplying them arms.

He explained that the military High Command would only make the matter public after concluding its internal checks to ensure that there are no loose ends.

The security chief said that the Nigerian Army, headed by the Chief of Army Staff, Lt-Gen. Kenneth Minimah, in conjunction with other military top brass was working tirelessly to sanitise the armed forces and fish out collaborators with insurgents.

He hinted that the Army Chief had been briefed on the Generals’ arms deals with the insurgents, adding that “he (Army Chief) is currently carrying out a secret and independent investigation on the matter.”

A few months ago, a soldier had told a foreign news agency that some top military chiefs were colluding with Boko Haram sect in their raging offensive in the North-East.

In a swift reaction, The Defence Headquarters described the allegations as grave and promised to investigate the claims. The outcome of the probe is yet to be made public by the authorities as well as the names of the affected Generals.

The insurgents operate with local and sophisticated weapons such as Improvised Explosives Devices, IEDs, AK-47rifles, rocket-propelled grenades and mortars.

A United States, US Network TV, NBC, recently reported that most of the terror group’s weapons were either stolen from Nigerian military stocks or purchased from the thriving Central African arms black market.

Meanwhile, the military high command has summoned the General Officer Commanding the 7th Infantry Division, Maj-Gen. Abubakar Mohammed to Abuja for an explanation into what led to shooting by some soldiers under his command at Maimalari Barracks in Maiduguri, Borno State.

Coordinator of the National Information Centre on Insurgency, Mike Omeri, yesterday confirmed the alleged mutiny by soldiers in Borno and the setting up of an investigation panel on the issue.

At the daily briefing on the update of insurgency activities in the country, Omeri, however, said the nature and details of the incident were sketchy.

But the Director of Defence Information, Maj-Gen. Chris Olukolade, in a statement earlier, assured that the military authorities will investigate the circumstance leading to the soldier’s’ act.

“The 7 Division of the Nigerian Army is to institute a military board of inquiry into the circumstances surrounding the conduct of soldiers who fired some shots.”

Media reports had suggested that the soldiers’ action was due to anger following the death of 15 of their colleagues in a Boko Haram ambush, on their way back from an operation in Kalabalge, but it was also gathered that the military personnel had deep resentment against GOC Mohammed.

Gen. Mohammed was reported to have narrowly escaped death on Wednesday when angry soldiers opened fire on his official vehicle when he came to address them at the command headquarters at Maimalari Barracks.

According to further information, soldiers who attacked the vehicle of the former GOC also shot two of the soldiers in his escort on the legs for guiding him into his armoured car and facilitating his escape.

However, in order to ascertain the cause of the soldiers’ shooting, the Nigerian Army instituted a high powered investigative panel and COG Mohammed has been summoned.

First published in the Pilot, May 16