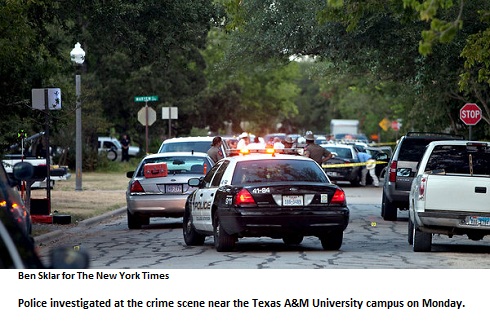 But a man at the house on Fidelity Street opened fire, killing Bachmann, 41. That triggered a 30-minute shootout with police that left the gunman and a bystander dead in an outbreak of violence that shocked this serene college town.

Police killed the gunman, but not before he shot and killed a 43-year-old man and wounded a 55-year-old woman. An officer who responded to a 911 call about the constable was wounded in the leg.

During confused and chaotic early reports, fears arose that College Station would join Aurora, Colo., and Oak Creek, Wis., in the latest spasm of shooting rampages by lone gunmen. Texas A&M issued a “code maroon” warning on its website, stating that an “active shooter” was in the area.

“It’s pretty surreal to happen in a small town like this,” Nicole McMurrer, 20, a Texas A&M junior, said a few hours later, peering over yellow police tape near her home a few blocks from the shooting scene.

Police identified the gunman as Thomas Caffall, 35, and said they knew of no motive. Caffall appeared to have no serious criminal record. According to court records, in 2006 he pleaded no contest to driving with a suspended license, a misdemeanor.

A man listed as Thomas Caffall on Facebook wrote that he was from Bryan, Texas, and lived in adjacent College Station. The profile photo appears to be the man shown in Caffall’s driver’s license photo, which police released.

Caffall described himself as a divorced Christian. “I am pulling a cross between Forrest Gump and Jack Kerouac (without the drugs). I’m on the road, permanently,” he posted.

According to his Facebook page, Caffall’s mother attended high school in Bryan, and his brother graduated from nearby Navasota High School. His sister is listed as a College Station resident.

The sister, reached by phone late Monday, said the family was reeling.

“We’re just shocked,” said Courtney Graham Clark of College Station. “Our thoughts and prayers are with the families who were affected by this senseless tragedy.”

In his profile picture, he hugs a gray and black dog named Lucy.

George Clemenceau, 20, a classmate of McMurrer who was visiting her during the shootout, said he could hear whizzing as bullets passed by.

He saw a man lying flat on the ground who appeared to have been shot in the back.