NewsRescue- Deadly conspiracy unravels following our article on February 5th, 2012, detailing the cyber propaganda warfare being mounted against Nigeria by certain websites, including a 2 month old forum, NaijaJive and an old public edited online editorial, RepublicReports. Below are some excerpts from the article:

NewsRescue- Classified reports reaching our news desk, indicate that certain websites are engaged in an intense cyber war against Nigeria and its people. Cyber propaganda wars are frequently carried out via online and mobile platforms, to foment discord, stoke the fires of tribal, religious or other sentiment – ultimately resulting in deadly violence and destabilization.

We can clearly implicate NaijaJive, but it appears Republic Report is only guilty by association and lax operational guidelines. We do hope the later is the case for this news media outlet.

A fictitious agent, ‘Rossquo’, a moderator of NaijaJive and editor of RepublicReport, posted the source-less, mischievous article on both websites. Following our expose of NaijaJive, the owner requested Rossquo post his source. The source was Bible4Africa.com, also a months old website and malicious propaganda outfit.

Bible4Africa website: Spreading the Bible or spreading the seed of hate and discord in Africa?

The article and article page has now been removed from NaijaJive, and Bible4Africa remains the only source of two similar, pungent articles online, written with a high level intelligence format, possibly by intelligence experts or other highly trained individuals.

Bible4Africa.com, is a fairly new website for a missionary group operating in Delta State, Nigeria with its operators from Wichita, a prominent ‘KKK’ activity state in America, and it remains the only source of this article against MEND leader, Dokubo Asari, IBB, Buhari and Nigeria as a whole.

NewsRescue at this time refuses to investigate Bible4Africa, which has a Nigerian headquarters in Delta State, Nigeria, with details below, because we are too sad to see such a propaganda campaign being waged against peace, life, prosperity and progress of Nigeria and the world at large, by a religion affiliated website claiming to wish to spread the Bible:

Yomi Opeola-Messiri of Bible4Africa and his wife engage in their ‘missionary’ work in Effurun/Warri, Delta State Nigeria. 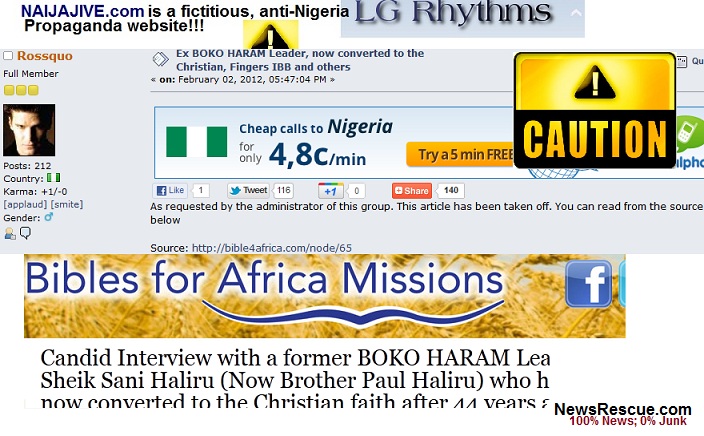 It is recollected that in 2011, the Oslo, Norway Island Bomber, Ander Berivik, who was arrested in connection with over 84 deaths in twin car bomb blasts and an Island gun-massacre of immigrants in Norway, belonged to a KKK type, European supremacist thinking, which includes groups like the SIOE (Stop Islamization of Europe), set out to disintegrate Nigeria.

Can we find this highly skilled, dangerous European supremacist radical finger print in more of the chaos and mayhem in Nigeria, apart from just this exposed cyber warfare episode?

It is important to mention that Nigeria is a rather random mix of Muslims and Christians, both North and South, with as many as 6 ‘Northern states’, having a Christian majority, and this underscores the ignorance and convalescence of foreign media and likes of Brevik abroad who see and suggest such a simple North-South divide.

Our readers can again satisfy their curiosity and settle their consciences by contacting this platform and requesting their source and reason for spreading this anti-Nigeria, destructive propaganda. Confidential sources also indicate that the Nigerian security services are seeking out this outfit.

RepublicReports also implicated for allowing the same individual and fictitious moderator character of NaijaJive, Rossquo post the same source-less article on their website, it is expected will soon act responsibly and apologize to Nigeria.

Once again, we call on all readers to understand that there are many enemies of Nigeria’s great progress, while many other Nations in the world are battling for survival, and it will be sad if malicious, fabricated stories, and a few retarded and malicious individuals, including the like of foreign sponsored Boko Haram terrorists, destroy and rob Nigerian life and future. Please be vigilant and please take the course of peace and understanding always. There are people with their ulterior agenda’s, playing Nigeria like a puppet game. 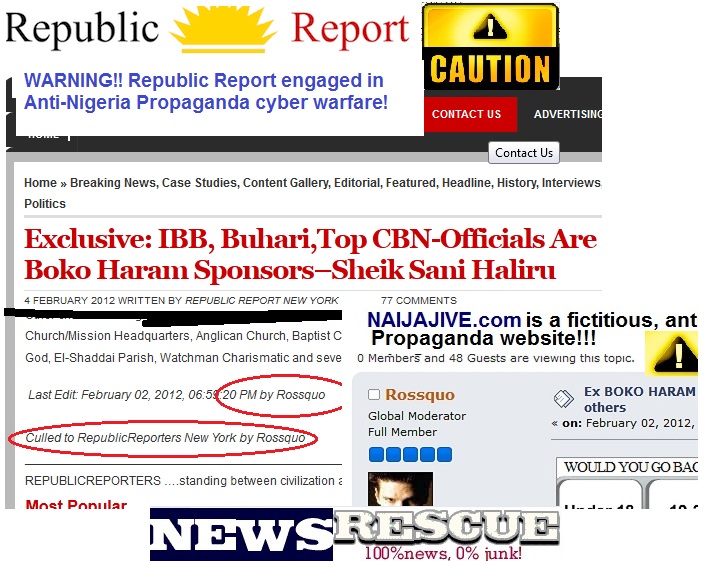