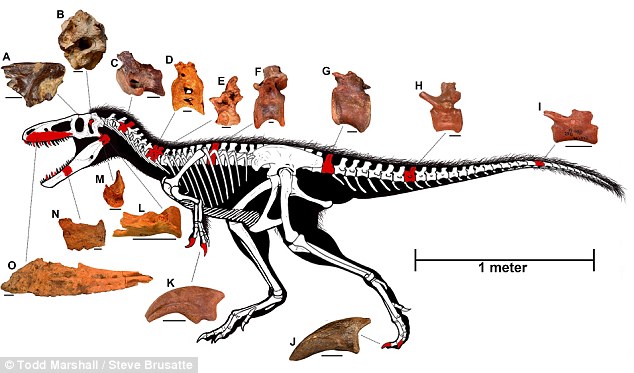 In recent days, news on the discovery of a new dinosaur species appeared in the world media. Although the discovery seems to be of a scientific nature at first sight, the articles on this subject clearly revealed that the objective was to support the imaginary evolution of dinosaurs. This article examines this new case of the imagination of – and the manufacture of fake fossils – by evolutionists and responds to the claims of such news that “the Missing Link” was found.

This news, citing a study published in the US science journal of PNAS (Proceedings of the National Academy of Sciences of the United States of America), reported that a horse-sized fossil Tyrannosaur was discovered in Uzbekistan. It was claimed that this animal had witnessed the so-called evolutionary transformation between small dinosaurs and the larger ones. The estimates went so far that even the weight and height of the creature were calculated and speculations were made on its sense of hearing and how successful it was in capturing its prey. However, the truth was considerably different from these estimates: There was only a 7-cm bone fragment which was believed to be the animal’s braincase.

The Product of Fiction Science by Darwinists: Fiction Dinosaur

In short, an entire dinosaur was depicted only based on a single skull bone in these news reports. Let us think of a giant jigsaw puzzle of thousands of pieces; if you carefully place the pieces in a way to fit each other perfectly, you can see the full picture. If one or two pieces are missing, it would not be totally objectionable to guess them. However, if you have only a single piece and “speculate” about all of the remaining pieces based on that single piece, this would be truly preposterous. The entire body including the mouth, nose, hands, arms, feet and tail, as well as the weight and height, and even the existence of feathers, which are merely a figment of the imagination, were dreamed up based on a single bone fragment.

For that reason, it is obviously not a fossil construction “based on scientific evidence” since a skeleton based on a single bone fragment is simply a figment of the imagination.

Contrary to what the article claims, the bone in question was not part of a new fossil. It was Stephen Brusatte from the University of Edinburgh who came across the bone during his visit to a museum in Russia in 2014. Hoping to utilize other bones previously found in the same region, scattered bone fragments in various institutions were brought together. These fossils were extracted at different times between 1997 and 2006; indeed, they were a total of 15 incomplete and scattered bone fragments including seven vertebrae.

Do not say that “What good could be done with those irrelevant bone fragments?” If you push the limits of the imagination as Darwinists always do, you can come up with a drawing of a dinosaur with its entire body from the tail to the head, similar to the one in the illustration.

You could do that; however, let us remind you again that you should ignore the fact that these bone fragments are not connected to each other and this certainly pushes the very limits of the imagination as well.

Indeed, the article admits that the bones did not belong to the same creature as follows:

Individual bones come from different individuals, as they were surface-collected as isolated specimens in the Bissekty Formation of Uzbekistan. We therefore consider it most parsimonious that all of these specimens belong to the same taxon.

The confessions in the article are not limited to that. However, the article also provides the following explanation in response to any potential objections on the establishment of such an odd link between these fossils that belong to different creatures: “If later discoveries show this to be incorrect, then the name bearer of T. euotica is the highly diagnostic braincase.”

Endeavors to Revive the Fairytale of the Feathered Dinosaur?

Considering these facts, given that this so-called fossil has been forcibly produced, why is that certain publications which claim to be “scientific” could give coverage to that? Here is the surprising part of the story:

On one hand, the science journal PNAS published fabricated news on a dinosaur produced from a tiny fossil; on the other hand, news with a headline of “Missing Link Revealed” along with illustrations of a feathered creature and many other slogans appeared in National Geographic, New Scientist and on the BBC as well. Scientific facts were once again distorted – in order to revive the theory of evolution. Why was it found necessary to create such a tale of transitional forms?

The imaginary evolutionary tree of Darwinists has many deficiencies and, as is well-known, the links claimed to exist between large dinosaurs and small ones are still missing. Tyrannosaurus was a predatory dinosaur species that lived between the Late Jurassic Period (150 million years ago) and the Late Cretaceous Period (65 million years ago).

While tyrannosaurs (T. rex) was a small species of dinosaurs, those dating to the Cretaceous period were gigantic. Claiming that tyrannosaurs were the so-called ancestors of giant dinosaurs, evolutionists were required to fill the gaps in between with the appropriate transitional forms. However, there was a huge gap of 20 million years in the Middle Cretaceous period between these two. A transitional form to meet the necessary qualifications would be well enough to fill that gap: To this end, this new dinosaur, Timurlengia euotica, estimated to be 90 to 92 million years old, was produced. It was claimed that although this creature possessed a large brain and an advanced sense of hearing, it was, in fact, as small as a horse.

Darwinists, using their imagination, did not forget about adding feathers to the dinosaur picture so that it could reinforce the evolutionary fairytale of “dinosaurs transforming into birds.” It was so dramatized that the journalNature had no hesitation in publishing the picture of the feathered dinosaur as“a wonderful affirmation of evolution.”

The estimation of the height, weight, hands and arms of a creature and the construction of an entire skeleton based only on a skull bone are an important indication of the imagination of the Darwinists. Indeed, there is no scientific value in such deductions.

Why Can’t the Fake Dino-Fossil Be the Missing Link in the Darwinist Tales?

The lack of transitional forms is one of the greatest pieces of evidence that leads evolution to a dead end. Indeed, Charles Darwin was well aware of this fact and referred to that in his book: “If my theory be true, numberless intermediate varieties, linking most closely all of the species of the same group together must assuredly have existed… Consequently evidence of their former existence could be found only amongst fossil remains…” (Charles Darwin, The Origin of Species: A Facsimile of the First Edition, Harvard University Press, 1964, p. 179).

Darwin stated the following in the chapter of “Difficulties on Theory”:

Why, if species have descended from other species by insensibly fine gradations, do we not everywhere see innumerable transitional forms? Why is not all nature in confusion instead of the species being, as we see them, well defined? Innumerable transitional forms must have existed, why do we not find them embedded in countless numbers in the crust of the earth? … Why then is not every geological formation and every stratum full of such intermediate links? Geology assuredly does not reveal any such finely graduated organic chain; and this, perhaps, is the most obvious and gravest objection which can be urged against my theory. (Charles Darwin, The Origin of Species, p. 172, 280)

Darwin was very well aware of the dilemma of his theory, but he still proposed that the “fossil record was inadequate.” He even claimed that if the fossil record was examined in detail, the missing transitional forms would most certainly be found. Based on this prophecy of Darwin, evolutionists have looked for these transitional forms through extensive fossil research around the world since the mid-19th century. However, these transitional forms for which they have ambitiously searched have never been found because, contrary to the claim of Darwin, THE FOSSIL RECORD WAS PERFECTLY ADEQUATE. All of the fossil findings which were obtained by excavations and research have revealed that life forms appeared on the Earth suddenly in their full and complete form, contrary to what is expected by evolutionists.

There is no place for fiction in science. Science is truly science only when it is based on evidence and proofs. It goes without saying that the science of paleontology does not require any fictional fossils. The fossil record, with 600 million fossil specimens available, already reveals the history of life on Earth quite explicitly. The petrified remains of these creatures in their full and complete forms shout out loud that they were indeed created by God.