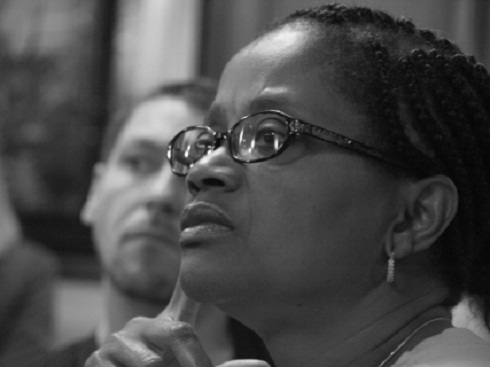 By MAY AKABOGU-COLLINS
Published: February 1, 2013

I was a visiting professor in Paris last fall and it was the first day of class. I was making copies for my 10:30 class at the faculty lounge where two female professors were kibitzing by the coffee machine.

“Oh, yeah,” one said. “Soon as I learned he’s Nigerian, I discounted everything he’d said as fraud.”

“Smart move,” agreed the other, nodding, “nothing good’s ever come out of that country. …”

I cringed, held my breath and skedaddled on to my classroom, where my students wanted to know my nationality. I’m American. “Bot Professa,” an African student’s hand flew up, “ware you from originally? I hear the voice of Africa.”

I inhaled deeply, chuckled but ignored that question.

When I left Nigeria for the United States in 1980, the plan was to earn an M.B.A., a doctorate in economics, and then return. It was my moral obligation to help develop my country, whose oil wealth financed my education. An M.B.A., a Ph.D. and 32 years later, I’m still here, abroad. In 1992, when I applied for a position at my alma mater, the University of Ibadan, the dean replied, “Why on earth would you want to return when everybody’s trying to escape?” No one’s been paid for over three months, he explained, and universities are on strike half the time.

In 1980, the naira had a very favorable exchange rate against the dollar. En route to the United States, I stopped over in London. All along King’s Road, the shopkeepers beckoned: “Nigerian? Welcome. Come inside.” I was proud to be from Nigeria and was offended when the country was confused with Niger. But, today, if I can pass for someone from Niger — sadly, I would be glad.

Is there a person on the planet who remains unfamiliar with the Nigerian e-mail scam? As a Nigerian living abroad, I’ve become embarrassed — indeed scared — after learning that in February 2003 a Czech victim of an Internet fraud murdered an innocent Nigerian in Prague.

That isn’t the scariest narrative — not by a long shot. In recent years, Nigerians abroad have been warned: “Don’t come home. Just send money.” But if one must, say, attend a wedding, a funeral or take a chieftaincy title, it is necessary to hire prearranged police protection from the moment you land at the airport until the moment you depart.

Last summer, my ailing 87-year-old mother, worried that her days are numbered, called a family reunion for Christmas. My three U.S.-based siblings and I made plans to return home with all our kids. At the last minute, my brother sent an e-mail canceling the reunion. “What?” my daughter said, her glass of iced tea slipping out of her hands and shattering on the tile floor. Uncle Tony can’t guarantee our safety in Nigeria, I explained.

“What about hired armed security like the last time?” she inquired. I showed her the link to the news report my brother had sent headlined, “Gunmen Kill U.S. Returnee in Enugu,” his hometown in Nigeria.

Ogbo Edoga had returned from the United States to attend the meeting of an organization of Nigerian professionals in the United States to raise funds for an ultramodern medical diagnostic center in his ancestral village. On his way, he was robbed and shot and killed with an AK-47. He had hired police protection, as had many Nigerians who visited our motherland only to be robbed and murdered. The lucky ones got kidnapped and released after their families paid a huge ransom. And now, Mom’s joined the choir: “Don’t come home.”

Here’s what is shameful: This is the Nigeria that has been one of the world’s top 10 oil exporters for decades; the presumed “Giant of Africa” when I was leaving in 1980. But three decades later, despite a half-century of billions of petrodollar inflow, in March 2011, at a World Bank-O.E.C.D. conference in Paris, I found myself sliding down my chair to hide my face behind my laptop as a fellow economist explained why Nigeria was excluded in a comparative study thusly: Since Nigeria (with South Africa) dominates the Sub-Saharan African economy and since Nigeria does so poorly at wealth creation, if included, it would render Sub-Saharan Africa’s genuine savings dwarfish vis-à-vis East Asia and Latin America.

Here’s the thing: One doesn’t need a Ph.D. in economics to understand the correlation between poverty and today’s high crime rate in Nigeria. When corrupt politicians persistently embezzle public funds rather than produce proper policies, the result is a stagnant economy and its attendant human misery — high unemployment and massive poverty. Marginalized youths resort to Internet scams, kidnapping, or join Boko Haram. When the police go unpaid for months, the citizens become the logical prey.

That’s where Nigeria is today. It will not change until we, the people, join in a mass outrage against corruption, demand transparent accounting of our oil revenues and economic justice. Only then will an honest leadership emerge to invest a fair share of the oil revenues in capital in such a way as to permanently raise the consumption level of the masses. Otherwise we Nigerian expatriates — the most educated immigrant group in the United States — will remain in exile, and Nigeria will remain a breeding ground for terrorism.

Is there an Honest Ernest among Nigerians who is able to galvanize us? Can something that good come out of Nigeria? That’s a palm reader’s guess.

May Akabogu-Collins is a visiting professor of economics at the American Business School in Paris.