Former minister of immigration, Abba Moro has been picked up by the EFCC.

The former minister along with his deputy, Anaesthesia Nwaobia and another were picked up to face 12 charges next week related to embezzlement, laundering and misconduct against the State. 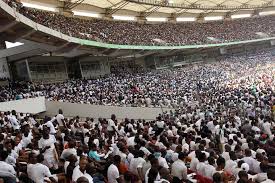 It is recollected that in the Abba Moro scam of 2014 which led to the death of as many as 20 Nigerians including pregnant youth, 2 million Nigerians were scammed by the ministry, invited for job recruitment for only a few thousand positions. The two million all paid for recruitment forms.

The stampedes that resulted at crowded stadia led to the deaths of Nigerian job seekers.

Abba Moro confessed his fault and blamed Satan for it. Jonathan did nothing.