My name is Dr Waziri Isa Gwantu. I am a lecturer at Ahmadu Bello University, ABU Zaria. I will share with you a torrid story of how Buhari’s military killed my 4 undergraduate children, Muhammad, Fatima, Hassan and Hussein, all in one night two years ago.

Two years on, the horrible experience of December 12-13, 2015 has persisted, like an indelible paint in the eye of my heart. How could I ever forget? It will ever remain a dark day for the remaining days of my life. That was the day I lost four of my children— three boys and a girl; all university undergraduates during the tragic band brutal attack on members of the Islamic Movement in Nigerian by President Buhari’s Army led by General Buratai in Zaria.

For my family, the day started like any other day. That day coincided with the 1st of Rabi’ul Awwal in the Islamic Calendar. That is the birth month of the Prophet (SAWA). It was supposed to be a joyous month, full of festivities. To kick start the merry making, will be a ceremonial change of flag at the Hussainiyyah Centre in Zaria later that day. No one wants to miss that symbolic flag hoisting, signifying a transition from the sad season of AlMuharram, in which the brutal killing of the grandson of the Prophet, Imam Hussein took place and the fortieth day commemoration of my martyrdom as well as the death of the Prophet in Safar. Flags change from black to green over all domes of Islamic centres otherwise known as Husseiniyyah all over the world. Mood changes as well from sadness to happiness. Even the mode of dressing changes from a predominantly black theme to a more colourful and brighter one. There was absolutely no premonition that something ominous was lurking in the corner.

I set out to drop my children earlier at the Hussainiyyah venue, so that they can contribute in getting the venue ready for the festive occasion. First signs of problems however appeared as I approached the centre, when I heard sound of gunshots. The roads were blocked and people were being diverted. I tried to enquire what the problem was and someone told me that soldiers were shooting Shiites. When I asked for what reasons, he simply told me, better find your way out of here fast so it doesn’t affect you! I wondered whether if this was what the Sheikh had repeatedly told us, that there were attempts by the government to attack the Islamic Movement. I was present some weeks earlier when the Sheikh had informed us that he got security reports that the military was trying to perfect a scenario where they would tell the world that the military was attacked by the Shiites and then use that as an excuse to descend on every member of the movement in a massacre.

I therefore decided to follow the diversion and take my children to the Sheikh’s house instead. As I dropped them, I told them I would get back home and pick others. I told them to alert me when the Sheikh is ready for the Programme. The call never came until late in the night. It turned out to be a distress call from one of my sons and not that Sheikh was to conduct any programme. It was about 10pm. He told me that he had been shot by the army at the residence of the leader. The first instinct as a father was to rush to where my son was shot but I was told by my son that all the roads leading to the sheikh’s residence had been blocked by the army. While still weighing my options, another of my sons called to inform me that the army were pointing their guns at him! An hour later, he called me to say he had been shot too in the leg. At that time, I could hear gun shots in the back ground. At about 1 am, l got another distress call but this time around, it was from my daughter, who told me she was shot on her belly. She was talking to me in a way she had never talked before! She said she knows we would not see again until we meet in Heavens before the Prophet(S). She said she was lucky to attain martyrdom. I felt some sense of helplessness because I couldn’t go to help them because the roads leading to the residence were blocked.

The following day, my eldest son called to tell me that there were hundreds of corpses everywhere and he was among the few still surviving souls in the place at the time. He told me that the soldiers had trapped them and he doesn’t know where other people were or if they were killed. I encouraged him to keep praying and as we were talking, he informed me that the soldiers were approaching him with guns and that he isn’t sure I will ever get to speak with him again. Bye-Bye Daddy, I love you but I love the Prophet even much more! Then the line went off. He was also killed.

At the time my son first called me that Saturday night told me that he was dying because of so much blood loss, I was devastated because I could not go to help them. All I could do was to make some quick contacts to see if this madness could be stopped. I called Reverend Father Matthew Hassan Kukah to appeal to the government to stop the killing in Zaria. I also called Reverend Hayep in Kaduna and reported to him what was going on. Both tried their best but it was futile. Apparently the die had long been cast by the government. With the knowledge of hindsight now, it was obvious that it was a premeditated mass murder! What is even more painful is that after killing these children, they denied us access to their corpses so that we could pray for them and bury them appropriately. They were buried in mass graves. What offense have we committed to deserve this sort of oppression?

Initially, the government had thought they would have killed every one of us. Then, there will be nobody to tell our story. They quickly rushed to Human Rights Commission to report that we had wanted to assassinate the Chief of Army Staff, in order to change the storyline. They didn’t then admit that they massively killed people. The government used the might of the state to embark on massive campaign of misinformation and calumny against us. They massively demolished structures and properties associated with us without following due process. When the International outcry by Human Rights bodies started to put pressure on them, they agreed they would institute a Judicial Commission of Inquiry. When they did, it was a one-sided one, with people known to be vehemently opposed to us as members. Some had authored tens of books against us, calling for our massacre anyway. The government next ensured we never get heard even at the panel. In spite of all these, there was a confession of existence of mass grave with at least 347 bodies. Before then, the government had refused to acknowledge that they massacred innocent people in Zaria, including my four undergraduate children.

The panel had no option but to agree that the Army carried out a massacre and held the Military Officers culpable. The government however rejected that narrative and rather outlawed the Islamic Movement, as if to say we are second class citizens with no rights to even exist, let alone be free to associate, or have a right of conscience, religion and all that. You can see that again the government has constituted yet another Inquiry panel, who also took deliberate steps to ensure that we are never heard. However, no matter the outcome of the panel set up by the government, the ultimate verdict on what happened and who is culpable would be determined by God on the Day of Judgment.

What was most painful was the fact that as the only graduate in my family, I believe I would train my children to become useful citizens that would contribute to the development of the country. I did not only lose them but I also did not have the dignity of praying for and giving them a befitting burial as they were all burnt and given mass burial by the army. Although I am devastated by the death of my four children, the family have taken solace in the fact that even prophets were killed for what they believed in. The Prophet’s children, who were the rightly guided Imams, were killed one after the other. Christians believe Jesus Christ was killed according to the biblical narration. How did Mary take it? She left things to God. They referred everything to divine justice. We have overcome it. We have left everything to God, but never forgotten. I had fourteen children, so the government still has ten more to kill. If they think that killing will kill an ideology, they are in for the greatest surprise of their lives. 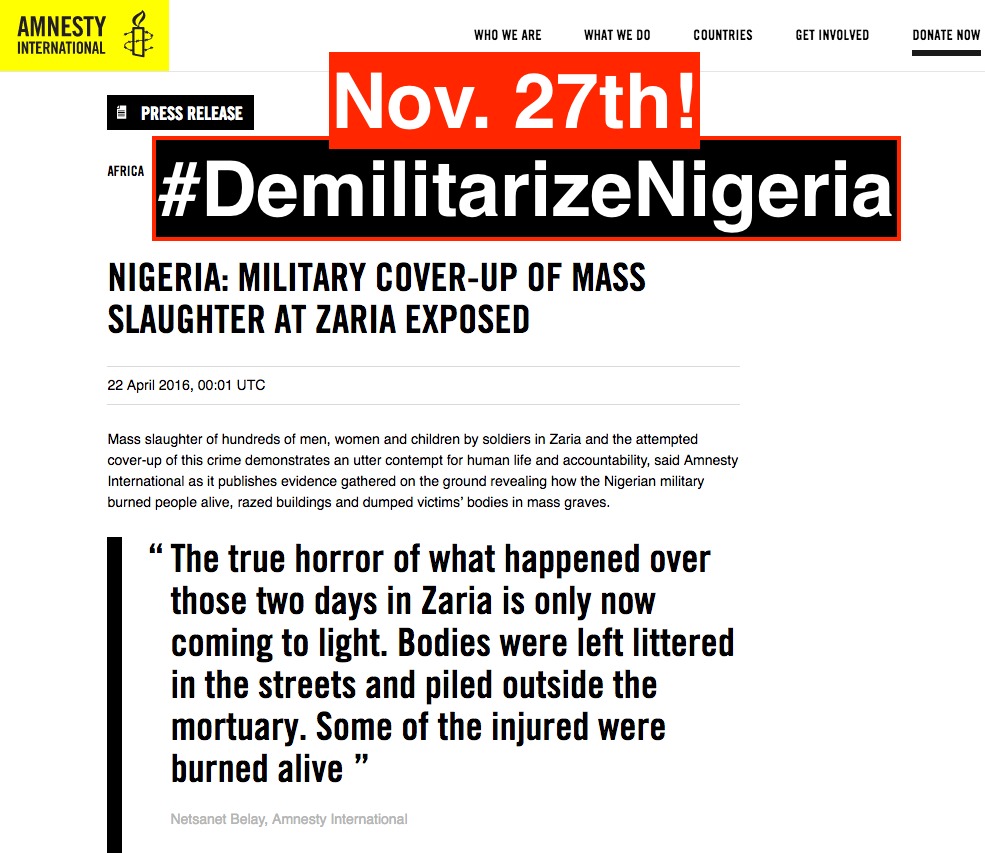