NewsRescue– In what seems to be ‘the taking of the hunt back to Boko Haram’, a vocal Muslim group, MuslimsAgainstTerror.com issued a press release offering a reward of $10,000+ to bounty hunters for the head of Abubakar Shekau, leader and spokesperson for the Boko Haram notorious terror group operating from the North Eastern part of Nigeria. Boko Haram has been blamed in over 1000 deaths in the current year.

Related: NewsRescue– Did Bees Sting And Cause Death of Terrorists Believed Headed For Sheikh Gumi Mosque?

This appears to be the first bounty- reward placed on the head of a terrorist in Nigeria. The site also offered rewards for all valuable tips on the Boko Haram group.

Firstly, let me mention that your real reward will be in heaven, Insha Allah. Allah(S) promised that whoever saves a life, it is as though you have saved the entire humanity.

Abubakar Shekau leads a deadly terrorist cult that continues to murder innocent people and damage the name of Islam and the Deen of our noble Prophet Muhammed (S). He embarrases us and causes secterian grief and strife in Nigeria. This is unbecoming for us Muslims. Enough is Enough, WALAHI! We will not keep living under his threats and attacks!

We are hereby grateful that Allah in His mercy has given us the financial capacity to offer this cash compensation as motivation to help soon end the days of this cursed man and stain to Islam. His days are numbered Insha Allah for all the harj(killing) that he encourages.

Whoever of the brothers is skilled in head-hunting, please join the ranks that go after this menace in a Jihad of our time. Allah(S) will be with you. Verily the protection of Allah(S) is sufficient for us all. Ameen.

We welcome more donations from brothers, Insha Allah we will increase the reward for his head and we also offer rewards for all useful information on his terrorist group and their sponsors. Nigeria’s security services needs the help of us brothers. Simply email us and you will be sure of 100% anonymity, fully confidential. We shall forward the information to the appropriate quarters, local and international, and arrange your compensation with you by email, Insha Allah.

To donate or send us information and tips: Email: [email protected] muslimsagainstterror.com

The dignity of Islam will be restored Insha Allah. Islam is our Deen, perfected Deen of Peace. 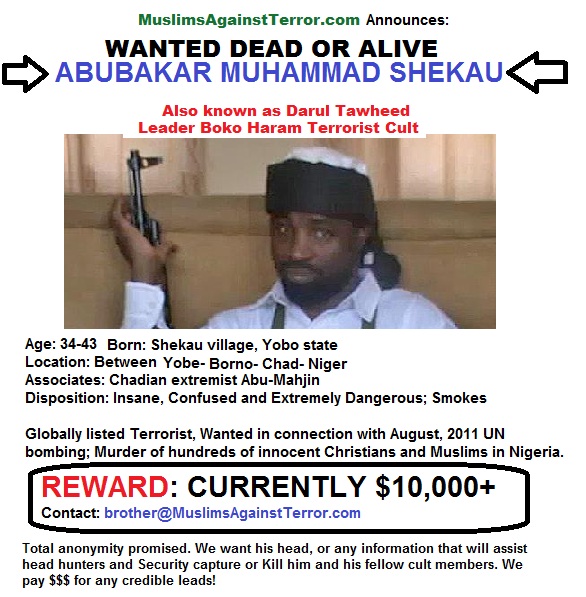 MuslimsAgainstTerror group became popular early June this year, by a Communique they released to the press and Muslim organizations, in which the group encouraged Muslims to condemn Boko Haram and form a protective shield around Churches: Communiqué: Fear None Save Allah. Defend Islam, Defend People, Defend Churches, Defend Nation