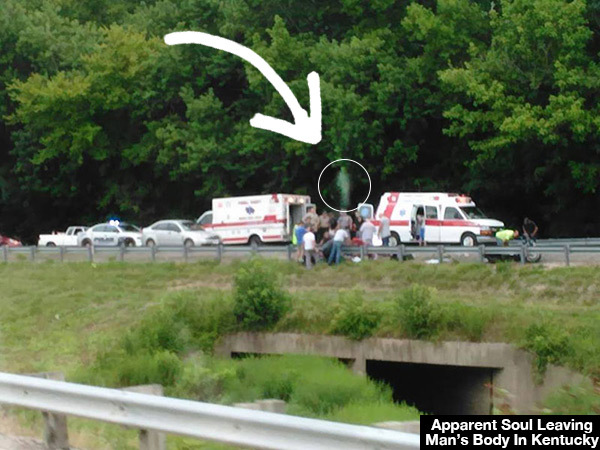 This is SO scary! A man tragically lost his life after a fatal motorcycle accident. But before the ambulance took his body away, people swore they saw his ghost — and there’s photo proof!

Someone call Ghostbusters! A photo showing the scene of a motorcycle accident is weirdly going viral after witnesses claimed they saw the dead victim’s spirit leaving his body on July 12! Whether or not you believe in ghosts, you have to admit, there is something really spooky about this image!

And ordinary bystander, Saul Vasquez, snapped the shot while traveling along a mountain parkway in Kentucky. The photo shows a back up on the opposite side of the parkway, and the middle of the road, is a crowd of people gathered around in a huddle, sandwiched by two ambulances. Seems like nothing special, right? But right above the huddle is a mysterious cloud floating that sort of looks like a soul exiting the body! The photo is unfortunately too far away to really see what the translucent shadow is, but it definitely looks like something from another dimension.

“I took this picture just a few minutes ago from the cab of my truck it was an accident between campon and Stanton on the service road just off of the mountain parkway,” Vasquez captioned the pic she shared on Facebook. “Zoom in and pay attention to the shadow just off the top of the state trooper hat. All I say is I hope everyone involved is okay.”

After Saul posted the pic on social media, it quickly received more than 7,000 shares. Viewers also commented under the image, sharing their astonishment. Others wished the spirit a safe travel. “Life after death continues and we better prepare to see the unseen,” one commenter wrote.  -Hollywood