At the just concluded APC Presidential Primaries which GMB (General Muhammadu Buhari) won, there was a moment that captivated me, a moment I witnessed and was part of; a moment that ordinarily would seem out of place and almost a show of ‘shame’ on the youths of our generation, but instead was the opposite… this moment was one I was proud of and proud to have been a part of. What was this moment?

When the five APC Presidential aspirants were called upon to each give their 10 minutes speeches before commencement of the election, the Imo state aspirant who spoke last, Gov Rochas Okorocha took bit of a jovial swipe at all the other aspirants by stating their ages and buttressing that he was the youngest of them all at age of 52. Of course he mentioned GMB’s age and the fact that he was the oldest of the lot (at 68 years). I, being a youth of under 35 years of age was seated among a group of mostly similar age bracket, approximately about 30 of us in number. Suddenly one of us started a chant in Yoruba: “Arugbo la fe, Arugbo la fe, Arugbo la fe” (this in English means, “its the old person we want”). To every one’s amazement this chant was carried on by more of us till it grew louder and went on for somewhat over a minute. While this was hilarious, at the same time the expression of dissent was silently passed in our views of Gov Okorocha’s swipe.

Why was this? Why would the so called youths queried this in my mind. I knew it was what we genuinely wanted, but I wanted to make sense of it. Then it struck me!

The one thing that is unarguably common in all kids is the love of an ‘Action Hero’. Kids from ages as early as 4 or 5 years up onto 12 years or even older all love to love an action hero, from Superman to Batman; from stars in X-men to Spider-man, there is that one hero or heroes that every kid falls in love with and is obsessed with. The days of leadership of General Muhamadu Buhari was from 1983 to 1985. Most of the youth of today were then the kids that fell into the age group of action hero ‘seekers/lovers’ in Gen Buhari’s time. Hence in our days from what I personally remember Gen Buhari was an ‘Action Man’. We would come home from school to over hear our parents talking about the changes in the country, the War Against Indiscipline, the decency and sanitization of the system; the daring attempt to smuggle a whole person from the Great United Kingdom, in a suitcase for corruption.

Even in school it was the same, we all knew things were changing or changed. There was order, even we as kids were warned not to urinate or defecate in public or throw rubbish on the streets and the likes. We knew and had an idea of what the Name General Muhamadu Buhari stood for. This was just for a short period of less than 2 years, but of course his tales lived on well after his regime, even the kids that were born after his tenure grew up to hear the tales of this same man, and this period of discipline and sanity in our Nation. Its permanently etched in our History. We wished we were older then to really understand and appreciate what it felt like to be a Nigerian adult then, as we have no clue of that now. 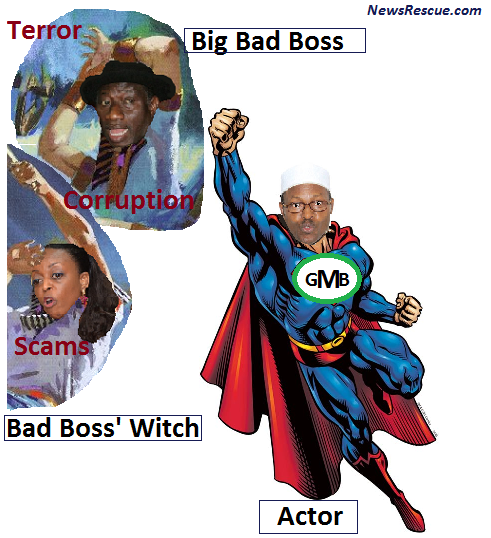 This I believe is obviously the same reason why Hollywood has realized now what a hit it is to bring back action heroes of before to the big screens once again. Hollywood keeps remaking loads of action hero movies in recent times, and most if not all of them turn out to be big hits. In our case it goes beyond just the nostalgic feeling or connection with the great action heroes of before, the ones we once followed and fell in love with only on the screens, this rather is a case of a  ‘True life drama’, therefore the reason why we youths crave to see our ‘Action Man in REALITY’ again. More so in the most difficult of times like this, where corruption and impunity has swarmed our land, where for the past 16 years we have steadily descended into the pits of lawlessness and impoverishment, over 10 million children are not in school, unemployed youths roam the streets in the thousands. Yet we know things were never always like this, there was once a hero who changed things, we remember the times, the tales, the flashbacks. We want it again. Its this desire that burns inside the hearts of the youth of this country, we want to see that man again, the man that fixed things when they were just as bad. We know we haven’t had any one close to him or his records so far, we know he has done it before. Just like Hollywood does it, let us all also bring back our Action Hero in 2015 before its too late, before ‘The Boss(bad guy or villain)’ and his goons as in the movies wipes us off in totality…in reality!

Lets make the return of General Muhamadu Buhari, our Action Hero a reality!!!!