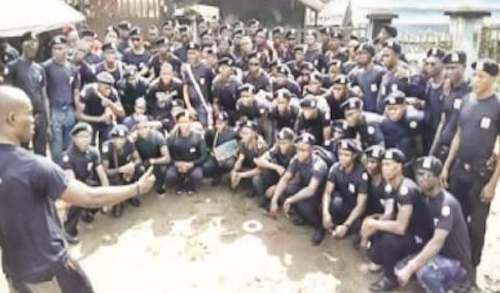 It debunked insinuations that BSS is a standing army, but stressed that what it established is a vigilance group.

The group would only gather intelligence and ensure that criminal elements do not compromise the safety and welfare of people residing in Biafra land.

The Publicity Secretary of IPOB, Comrade Emma Powerful, told the Sunday Sun, that the group would not be militarised as erroneously construed in certain quarters and in various online media reports.

Powerful said that members of the group were naturally peace loving people.

He also dismissed as untrue the story that made the rounds that the leader of the group, Mazi Nnamdi Kanu, made uniforms for members of the vigilance group.

He noted that IPOB was interested in the well-being of the people and ready to ensure the safety of its people returning from the North over the October 1 quit notice served on Igbo people in the North by a coalition of Arewa youths.

“Mazi Nnamdi Kanu, the leader of IPOB, did not sew any uniform for these volunteers erroneously called Biafra soldiers. There is no standing Biafra Army and we emphasize the word NO. We have security volunteers just like you have vigilance groups. IPOB is legitimately concerned about the well being and safety of Biafrans all over the world.

“IPOB is against all forms of lawlessness, from the menace of Fulani herdsmen to kidnapping, armed robbery and cattle rustling. All these vices will be stamped out in the coming months without recourse to armed confrontation.”