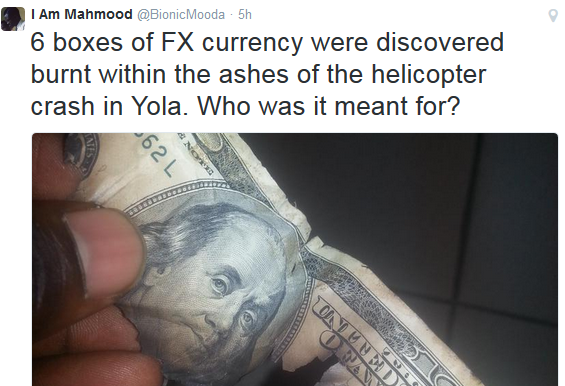 We have received serious reports that the helicopter that crashed near Yola, in Adamawa state last week, was loaded with hard currency and ammunition.

Veritable eyewitnesses at the scene informed ENDS agents about these details. According to witnesses, the chopper was ferrying two white passengers. The passengers chased away eye witnesses and barred most security agents. They ordered the chopper to be burned. It can be recalled that it was publicly reported in the media that the chopper was on fire and explosions were heard from within it.

These shady actions of the passengers of the chopper raise pertinent questions. What was the hard currency and arms onboard for? Could this chopper have been on a mission to supply Boko Haram? Why was it ordered burned? Who were the white passengers?

Recently a private jet belonging to the President of the Christian Association of Nigeria, Can was detained along with three passengers including an Israeli in South Africa on allegations of cash and arms smuggling. The confiscated $9.3 million dollars was only released to Nigeria after the Nigerian presidency blackmailed the South African government, threatening to harass their legitimate business interests in Nigeria.

The recent sham cease fire announced by the Jonathan-led government of Nigeria in suit with Ali Modu Sheriff, a named Boko Haram sponsor and the President of Chad also implicated in arming and supporting the terrorist organization, which allowed Boko Haram regroup and capture more territory in Borno state and the north half of Adamawa state has provoked serious review of the roles of Nigeria’s leadership in facilitating terror.

Currently, the Jonathan ordered clampdown on vigilante forces who had scored great victories against Boko Haram, liberating Maiha and Mubi towns in Adamawa has further pointed to an open effort by the nation’s leadership to protect Boko Haram possibly among other reasons to make elections impossible in the northeast next year February.

The well known Sarkin Baka of Adamawa was according to latest reports arrested Sunday for leading hunters who have amassed in their hundreds to successfully recover Mubi and Maiha. This arrest followed his house being burned down by Boko Haram terrorists when they captured Gombi late last week. The picture is one of Boko Haram and the Nigerian security services under the current leadership working in rapidly tandem.

Meanwhile the Emir of Kano has called on all Nigerians to desist from waiting for and relying on the army, but to arm themselves by whatever means possible and defend themselves and the territorial integrity of Nigeria.