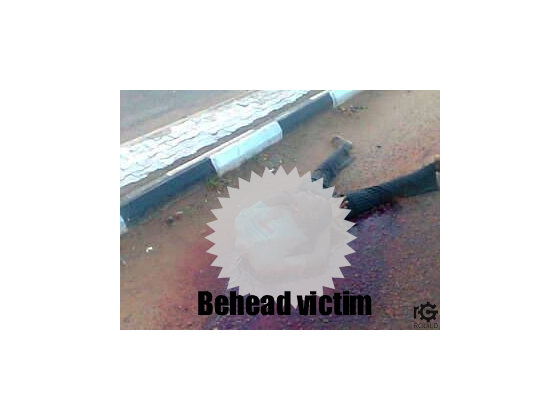 Investigation into the murder incident that occurred in Adamawa state on Wednesday last week has commenced as Detectives attached to the homicide unit of the Adamawa State police command are bent at unraveling the circumstance that pushed a 24- year- old man to behead his boy of 5.

The devious act occurred on Wednesday last week in Ganji suburb of Gombi Local Government of Adamawa State when one Baffa Alti, 24 and a cattle rearer cunningly took his son, Buba to the farm and beheaded him.

The suspect had confessed during interrogation that one Alhaji Sange Hassan, 63 had contracted him to get a human head for him at the rate of N1 million.

The 63-year-old village head had in reaction to the allegation denied contracting the first suspect, saying that he had no business with a child who is not of his ‘age mate’.

”I didn’t direct him (first suspect) to commit such ugly act. In fact, I was shocked when he pointed at me, that I directed him to commit the crime,” He claimed.

While parading the suspects before newsmen in Yola, the Command’s imagemaker, DSP Muhammed Ibrahim, confirmed that the gory incident occurred on July 24, in Ganji village.

The police boss said, Alti Alhaji, father of the first suspect, reported the case to the Gombi Police Divisional Headquarters that the suspect took his son (Alhaji’s grandson), to a bush, but could not return with him.

According to him, when Alhaji asked the suspect of his son’s whereabouts, he replied that the deceased was on his way home.

”After a while, the grandfather and some members of the family went to the bush to find out what exactly happened.

”It was after searching the nearby bush that they discovered the dead body of the boy, which had been beheaded and dumped in the bush,” Ibrahim said.

He said when arrested, the suspect confessed that he committed the crime.

”When interrogated, he confessed and pointed at a village head as the one who directed him to bring a fresh human head, at a cost of one million naira,” Ibrahim further revealed.

He said the two suspects were currently in police custody for further investigation.

Fielding questions from newsmen, the first suspect claimed that the District Head asked him to bring a fresh human skull for the sum of N1m.

Also speaking, the 63-year-old village head, denied the allegation leveled on him by first suspect, saying that he had no business with a child who is no his ‘age mate’.

”I didn’t direct him (first suspect) to commit such ugly act. In fact, I was shocked when he pointed at me, that I directed him to commit the crime,” He claimed.