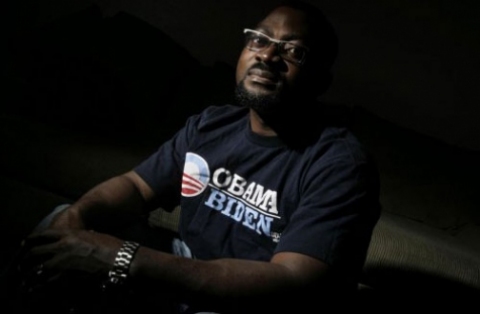 Adams Kennedy Unaji, a Nigerian activist whose life touched many and who was instrumental in mobilizing participants in the 2012 “Occupy Nigeria” protests, has died.

Mr. Unaji died on Wednesday, July 3, 2013 while waiting to go on a radio talk show at Vision FM in Abuja. Sources at the station said he died of an apparent heart attack, but there is no medical corroboration of the source of death as this report was filed.

The radio sources told SaharaReporters that Mr. Unaji complained of feeling uncomfortable as he waited to go on air. “He said he needed to visit the loo,” said one source, who added, “Once he returned, he asked to be taken to the hospital. He was drenched in his own sweat.” The source added that a vehicle belonging to the station was immediately arranged to take the activist to the hospital, but he died a short distance from the clinic.

He was married to Valentina Ibirogba, a Texas-based Nigerian, with whom he had a son named AbbaModupe Unaji.

Prior to relocating to the US in 2004, Mr. Unaji was a well known face among the circle of activists in the Civil Liberty Organization, Nigeria’s foremost civil rights group. In the US, he worked for Chase Bank in Arlington, Texas.

Mr. Unaji returned to Nigeria to take up the post of director of youth development at the Council for Nigerian National Interest. He held the position until his death.

Mr. Unaji’s shining moment as an organizer came in early 2012 when he became instrumental in mobilizing youths to participate in a popular uprising to protest President Goodluck Jonathan’s callous decision to hike the price of gasoline. The protests, which paralyzed several Nigerian cities and triggered demonstrations at Nigerian missions around Europe, North America and the UK, became known as “Occupy Nigeria.”

Mr. Unaji is survived by his wife, a son and his mother.