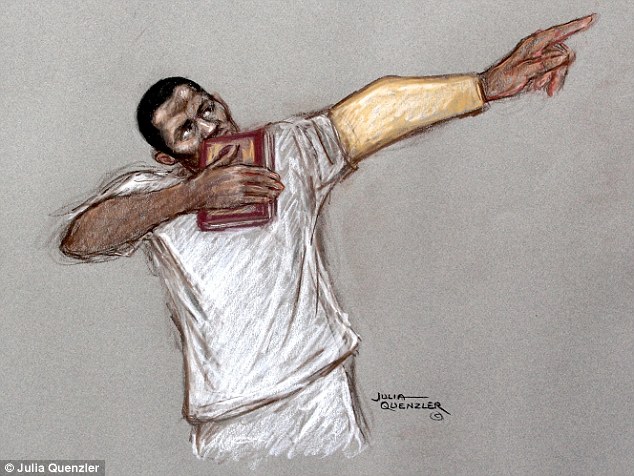 Exchange: Court artist sketch by Elizabeth Cook of a member of the public gallery blowing kisses at Michael Adebolajo in the dock at Westminster Magistrates’ Court

Clutching a copy of the Koran in his right hand, Adebolajo repeatedly interrupted the hearing.

At one point he said: ‘I’m only a man. I would like to alleviate the pain if I may.’ Then suddenly he held his hands aloft and closed his eyes before kissing the Koran.

Throughout the 12-minute hearing Adebolajo blew kisses towards a relative in the public gallery, understood to be his younger brother Jeremiah. When he was told to stand by the court clerk, he asked: ‘May I ask why?’ The defendant was then told it was a customary part of the court process, to which he replied: ‘Then I will sit’.

Addressing Adebolajo, the court clerk said: ‘I understand that you wish to be known as Mujahid Abu Hamza.’

The defendant replied: ‘That is correct.’ He was then referred to as ‘Mr Abu Hamza’ throughout the remainder of the hearing.

Adebolajo is accused of killing Drummer Rigby, 25, just yards from Woolwich army barracks in broad daylight on May 22.

Drummer Rigby, who leaves behind a two year-old son called Jack and a fiancée, died from multiple stab wounds and had to be identified by his dental records.

Shouting from the dock in a slightly slurred voice, Adebolajo said: ‘May I respond please? I’m not sure I’ve heard those specific charges put to me like that before.’ Court case: Adebolajo appeared to blow a kiss to this man understood to be his brother Jeremiah, who was pictured outside court

The magistrate told him it  was normal procedure for suspects to have the charges read out  to them.

To which Adebolajo replied: ‘I’ve got an idea, somewhere along the line a jobs-worth came up with a very foolish rule that a criminal, or so-called criminals, in the dock may not respond. For what reason?’

Mrs Arbuthnott told him that most suspects wanted to know the charges they faced.

Adebolajo replied: ‘You are  correct and I do not disagree  with that.’

As the hearing progressed Adebolajo – who was flanked by two plain clothes police officers and a security guard – suddenly seemed happy to stand up when asked.

At one point David Gottlieb, defending, told him to calm  down and said it was just a  ‘routine hearing’.

The court heard that the police have instructed a ‘world famous forensic psychologist’ to help them with their investigation.

Mark Topping, a specialist prosecutor from the Crown Prosecution Service’s counter terrorism division, said: ‘The Crown says the charges are indictable only and they must be sent to the Central Criminal Court.’

Adebolajo was remanded into custody and will appear at the Old Bailey either today or tomorrow for a procedural hearing.

He will then appear at the same court on June 28 alongside Michael Adebowale, who appeared in court last week charged with the murder of Drummer Rigby.