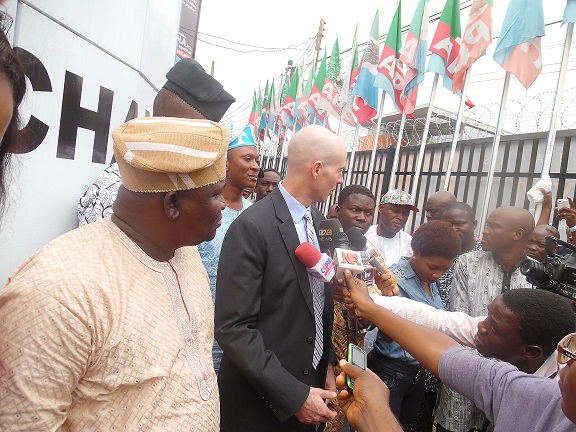 The Chairman of the House of Representatives Committee on Public Accounts and APC senatorial candidate for Lagos West, Hon. Solomon Adeola has called on the United State of America, USA and other members of the international community to impress it on the Federal Government the need to have a free and fair election in the rescheduled poll of 2015.

Making the call when a delegation of USA officials from the US Consulate in Lagos paid him a courtesy visit at his senatorial campaign office in Lagos, Hon Adeola said the international community must realized that a constitutional crisis will take place in Nigeria if the elections are postponed again adding that the fallout of such crisis may spell doom for Nigeria and the West African sub region.

“We as a party will accept the result of the election if it is seen by all to be free and fair without any form of intimidation or coercion. We are happy and thank the USA through its Secretary of State who came to Nigeria to support the poll and expressed disappointment at the postponement earlier. But we are not too impressed with the antic of the PDP led Federal Government particularly in the militarization of election and the seeming bias attitude of the Nigerian Police Force under the control of PDP led Federal Government.” He stated.

He recalled that in course of the campaign his campaign office was attacked on January 31,2015  by his PDP opponent and after police investigations nothing has been done almost a month after in spite of many witnesses including members of the  Nigerian Police Force adding that such does not portray a force that want to be neutral in an election.

Adeola told the delegation that after 16 years of PDP misrule, Nigerians seriously yearn for change to enjoy good governance adding that APC is the most credible platform for good governance and positive change in Nigeria.

Earlier on, Mr. Tom Hines, the Political Economic Chief of the US Consulate General in Lagos in company of the consulate Political Officer, Ms. Erica Chiusano said USA is interested in a free, fair and peaceful election in Nigeria which was why the Secretary of State Mr. John Kerry came to Nigeria adding that they have been interacting with major political actors across party lines to preach on the need for a successful election which the USA is supporting.