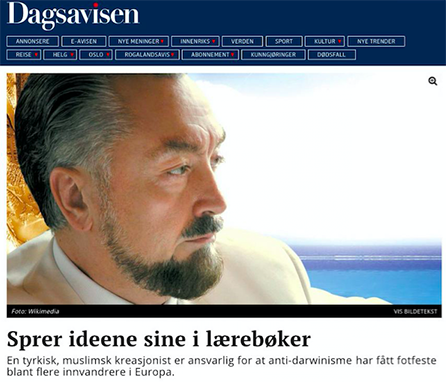 From Italy to Indonesia, Britain to Saudi Arabia, the most prominent newspapers in the world spoke of the success of the anti-evolutionist works of Adnan Oktar (aka Harun Yahya) that he has been carried out in the intellectual sense for the last 30 years. All the news reports concluded that he has won this struggle.

The Daily Telegraph made the headlines, “Turkey to end the teaching of evolution theory in lower school.”

“Adnan Oktar, a prominent Turkish creationist, has led a crusade against the teaching of evolution, saying the theory is a European invention developed as a slight against Islam.”

The news also read; “The Koran, like the Bible, teaches that Adam and Eve were the first humans. God is said to have created Adam from Clay and then formed Eve, also known as Hawwa, from Adam.”

Pikaia, the prominent atheist and communist Internet website based in Italy, had the headline: “Turkey says goodbye to Darwin.” The news report outlines the anti-evolutionist developments which  Adnan Oktar has been instrumental since 2008 -for the last ten years- in Turkey: The ban on Richard Dawkin’s website, distribution of The Atlas of Creation across Europe, the anti-evolutionist conference held in Milano The news report also included  video of Alpaslan Durmuş, the head of curriculum for the Ministry of Education, in which he announced that Darwin’s theory would be removed from lower school programs.

Skalanews’ [Indonesia] story about the removal of the theory of evolution from the curriculum in Turkey is as follows:

In the Saudi Arabia version of Asharq Al Awsat, one of the three major newspapers of the Arabic world published in three continents, there was news report with the headline, “Harun Yahya has won his struggle against the theory of evolution”

The related news is as follows: “ The theory of evolution has been attacked by Adnan Oktar [aka Harun Yahya] who is known to be close to the AK Party and has strong power over the business world and many aspects of media. Adnan Oktar has his shows on A9 TV Channel, with ladies with revealing clothes and make up and a group of young people. Adnan Oktar lives in a luxurious villa and he has many houses and villas in the most prestigious locations of Istanbul.”

The story goes on:

“According to Oktar, Darwin tells a lie and there is not a process called the process of evolution. He says that he will award anyone who brings a proof validating the theory of evolution with three million dollars.

The Sargasso, a website based in Netherlands, had the following news:

“When the words ‘Turkey’ and ‘evolution’ are told, the name Adnan Oktar comes to one’s mind. Starting as of next year, pupils in high schools will no longer hear about the theory of evolution in Turkey. The name Adnan Oktar is the first word that comes to mind when the words Turkey and Creationism are uttered. In the West, Adnan Oktar is known as the author who, about ten years ago, sent a thick, pleasant anti-evolution book with the name “The Atlas of Creation” to thousands of politicians, schools and prominent names in Europe. Many American Creationists praised this book, stating that it is full of information. Adnan Oktar has a daily three-hours long live broadcast show on A9 TV Channel in which well-groomed ladies called “kittens”, setting a role model for Turkish women, participate. Will the well-groomed ladies of Mr. Oktar be a role model for modern Turkish women? This is highly probable.”