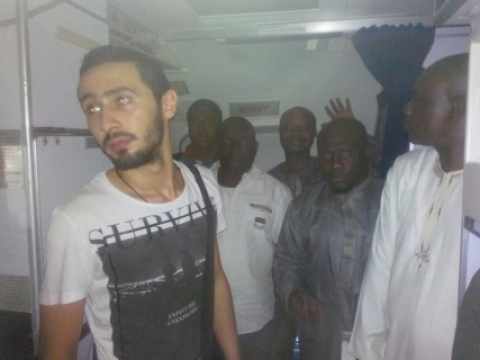 NewsRescue– It started with the midday flight. passengers were delayed Friday afternoon at the Abuja airport for hours with no official statement by the airline.

When the plane arrived and the passengers noticed that only a select few were being allowed to board, the passengers for the afternoon flight proceeded through the boarding gate toward the plane. Apparently on seeing the passengers storming the plane, the plane hurriedly took off.

The passengers then proceeded to shut down the Aero Contractors boarding gate computers, protesting that if they can not fly and no decent explanation is given by officials, then no one else will fly.

Finally after several hours wait, the afternoon flight finally set out to Lagos, but the worst from Aero Contractors was just coming.

The 8pm flight to Lagos was next to be delayed; again without explanation to the passengers. The plane delayed by 4 hours, finally returned to Abuja at 12pm.

The passengers who had waited 4 hours for their flight proceeded toward the plane only to be told by the pilot that he was not flying.

The exasperated passengers, Nigerian and foreign waited on the tarmac and then went to another craft to sleep inside.

At 3pm they were kicked out of the aircraft and forced to sleep on the bare floor of the Abuja airport till 7am Saturday morning, finally flying to Lagos at 8am.

The most aggravating problem with the behavior of Aero Contractors according to the passengers, was the lack of regard for their customers. No official explanations were given, there was no empathy for the paying customers and provision or recommendations on how they should put up for the night.

The Minister of Aviation, Stella Oduah is currently embattled on the verge of sack for squandering public funds to the tune of $1.6million, in the purchase of armored cars.