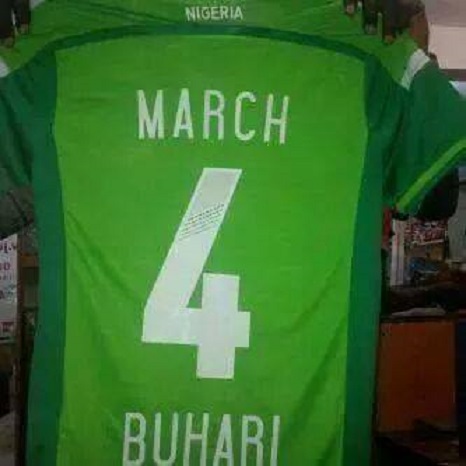 The enemies of Democracy in Nigeria have done all they could to scuffle the WILL of Nigerian people through deliberate intended machinations to break our resolve to politically and democratically remove them by the use of our voting right,using our voters gun (the PVC) in febuhari, the month they were so scared of, becouse defeat was seen to be very glaring and inevitably at their door step,they choose to delay a done destiny,they thought that is the best choice of the alternatives they developed, they dribble on options already drawn to slow our momentum,they subjugated us to share torture to our living souls caged in the cocoon of change, but unfortunately for them Nigerians have refused to be broken.One option after another, we break them, becouse we Nigerians have since sides with change.

History have since recorded Simone Gbogbo as a CONVICT who took part in calling the hired Thugs to stone those seeking for CHANGE. Just like her husband who always does the opposite of what he preaches,together with our Nigerians Simone,the Gbogbo of Nigeria have persistently tried our patience,pushing us to the era of Gbogbo but only this time around the era will be recorded in Nigerias history book.

If you dear talk about the misfortune Nigerians endures daily due to their clueless,visionless,dreamless actions they will level you an enemy.

The opposition,especially the APC (as the rest are satellite parties,in the hand of cronies) have since been leveled as ‘Janjaweed party’ becouse of exusting their equal,legimate and legal right to  participation in Democratic process under a world appoved democratic system. please what do you think is more of terrorism than these?

Our confused president Goodluck Jonathan has always been proud of making few of us,about 5% very rich.This is the same president who boosted of the private Jets  used by the Cabals to escort him to kenya. In his analysis, with regard to the private jet own by his cronies ,the hanger president concluded that,it is an insult to refer to Nigerians as been poor.

Many have been blackmailed,Tunted,arrested,molested,harassed and intimidated, but the good thing is that,we the people of Nigeria will not be cowed or coerced, since we all are in possessing of Our PVC.

The time for change is now or never, becouse the hardships and excess stealing of Our resources is enormous,unbearable,unbelieving,maglomanic and out of reality of the stinking hardships Nigerians have to bear becouse of inept leadership of the most clueless and disunity promoter in the Nigeria’s tragic history. The good thing Nigerians,change is coming.

While they have succeeded in postponing our febuhari 14th general election,they end up making a wrong choice,they chooses the month of march-uary,a month ment for the total  burial and funeral of their political life.

This time around, it is between them and Nigerians,while many Nigerians are not politicians most of them have sided with change.

We shall march in the month of march,with our power versus corruption (PVC) to the Machuary  accomodating their dead carcasses of their dead and buried political life.