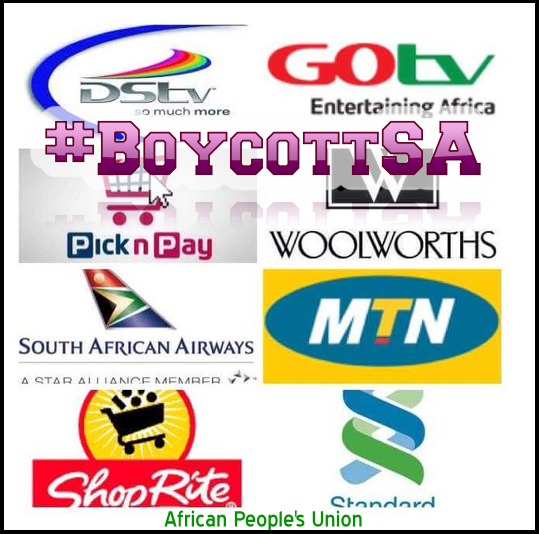 The Position of the African People’s Union on the decades-long and ongoing xenophobia in South Africa:

Whereas it has come to the notice of the people of Africa that blacks in South Africa still live in apartheid-like conditions, in ghettos called ‘townships.’

Whereas it is realized that in spite of South Africa’s booming economy there are limited opportunities for blacks, leading to animalistic competition.

Whereas it is understood that the ‘townships’ ghettos for blacks lacks reasonable security for life and property.

Whereas we do realize that xenophobia in South Africa was initiated as government policy of the ANC since 2002.

Whereas we do recognize that the subhuman style of mass deportations of migrant foreign workers since 1994 bearing all brutality and insolence of colonial operations deployed against blacks during apartheid, directly contributed to the development of systemic xenophobia in nation. *Lindela.

Whereas we do recognize that the “community policing” and spying provision in the 2002 Immigration act adopted by the ANC in 2005 directly promotes and endorses xenophobia.

The African people’s Union expects the South African government to review its Immigration laws towards protecting and not persecuting foreigners.

We expect the South African government to act to protect foreign nationals in the state.

We expect the South African government to provide real opportunities for African blacks in the townships.

To embark on widespread citizen economic sanctions against the South African government and corporate business interests via citizen boycotts.

To continue to promote citizen sanctions against the Pretoria government and South African big Corp. until there is actual policy change and real effort to improve the living conditions in the townships and the security of lives and property of citizens and foreigners is treated as high priority.

To this effect, all Africans and friends of Africa are encouraged to boycott South African big Corp. products and South African government operations: 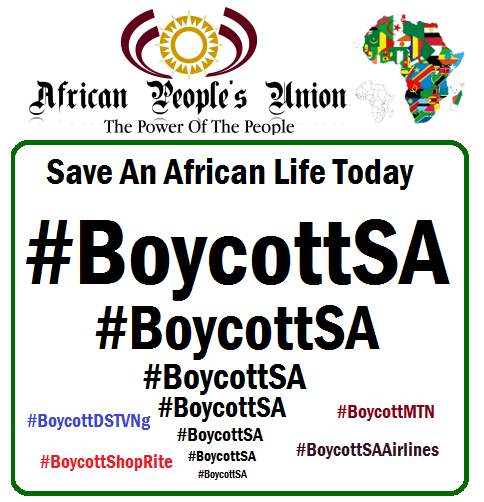