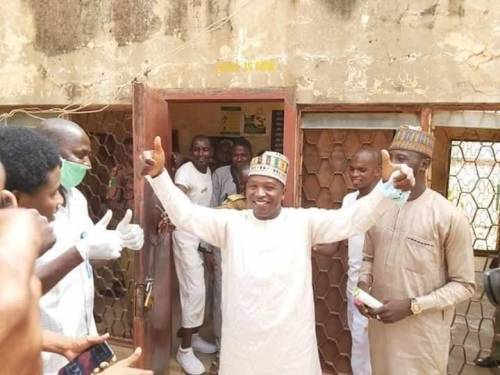 Nigerian activist, Ibrahim Wala popularly called IG Wala, who was convicted for falsely accusing a public official of corruption, has been released.

SaharaReporters gathered that IG Wala was released due to President Muhammadu Buhari’s approval for the release of 2,600 prison inmates across Nigeria.

The activist was jailed on April 15, 2019 by Justice Yusuf Halilu of the High Court of the Federal Capital Territory.

This followed a petition filed by the Chairman of the National Hajj Commission of Nigeria, Abdullahi Mukhtar.

In the petition, Mukhtar alleged that Wala used his Facebook page to incite the public against him and defamed his integrity and that of the commission he heads.

On September 26, 2017, Wala, convener of Citizens Action to Take Back Nigeria, had made a Facebook post accusing Mukhtar of corruptly enriching himself with N3bn after the 2017 Hajj.

The Court of Appeal in Abuja on March 20, 2020, however reduced the seven years jail term to two years.