Once again a Daesh in Nigeria suicide bomber has killed scores after detonating a suicide vest in the middle of Friday jumaat prayers.

The bomb which exploded about 2pm was detonated in a Mosque in Jambutu, Yola north.

Scores of Muslims were reported killed instantly and many injured who are being taken to FMC Yola.

Today is not just the Muslim holy Friday but also the Ashura very holy period for Muslims and Jews which marks the parting of the sea for Moses/Musa and God helping to kill Pharaoh. Muslims are fasting and praying.

Boko Haram/Daesh this morning also blew up a Mosque in Maiduguri killing over 28 during morning prayers.

It continues a spate of bombings killing dozens and of recent, aggressively targeting Muslims and Mosques in the northeast. 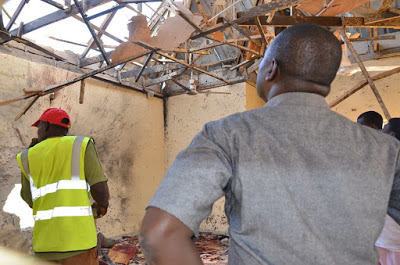 Against the backdrop of increasing wave of bombings during congregational prayers in mosques across Bornu State, the Secretary, Borno Elders Forum (BEF), Alhaji Bulami Gubio, on Friday, described members of the Islamist sect, Boko Haram, as cowards who don’t have the guts to face the military in bushes, but have taken to bombing innocent citizens praying in mosques.

Gubio, however, enjoined residents to form Mosque guards to address the spate of bombings in mosques across the state.

He said: “It is sad that the Boko Haram fighters have continued to unleash terror on Muslim worshipers in the state.

“Residents must stand up and protect themselves by forming Mosque Guards in all areas to halt this madness,’’ he said.

Gubio made reference to Islamic history, where the Holy Prophet Muhammad was said to have instructed the formation of Mosque Guards to prevent Muslims from attacks during the early stage of the religion.

“In the early stage of Islam, Mosque Guards were used to protect worshippers from aggression from Idol worshipers. I think we must copy from that by ensuring safety in our mosques,’’ he said.

The secretary described the bombing of mosque as cowardice, and said: “the Boko Haram sect members are cowards.

“Instead of facing the military in the bush, they decided to bomb innocent people praying in mosques.’’

Gubio said the renewed mosque attacks had shown that the insurgents had nothing to do with Islam.

“It is now clear that they are anti-Islam, they are only pretending to be Muslims, when their mission is to give the religion a bad name,’’ he said.

Gubio expressed optimism that the insurgency would end in a matter of time, and urged Nigerians to continue to pray for a quick end to the attack.