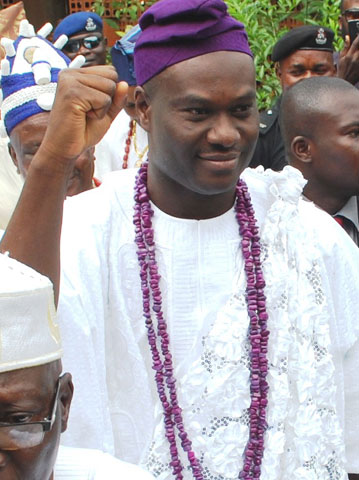 The new Ooni of Ife, Prince Adeyeye Enitan Ogunwusi of Giesi Ruling House, will soon complete traditional rituals of his coronation and begin the business of ruling his domain.
The Muslim Rights Concern (MURIC) congratulates the young and dynamic business mogul on his emergence as the new Ooni of Ife. We pray that his reign may be long, fruitful and peaceful.
We call the attention of the new Ooni to the preponderance of poverty, the absence of factories and the army of unemployed Ife youths. Apart from the Obafemi Awolowo University, there is hardly any presence of buoyancy in the city. We urge him to use his influence in the Nigerian and international business community to bring investors to Ile Ife.
But this project of turning Ile Ife into a prosperous city may become fait accompli if there is no peace. Constant wars have been scaring both local and foreign investors away from Ile Ife. It has also distracted the attention of the youth from engaging in productive ventures. We therefore invite the new Ooni to usher in a new era of peace and stability.
Oba Adesoji Aderemi (late Oba Sijuade’s predecessor) ruled Ife peacefully for decades. There was no single incidence of violence between Ife and Modakeke. He consciously promoted peaceful coexistence between the two communities. We believe that if it was possible for Oba Adesoji Aderemi to rule without fighting the people of Modakeke, it is equally possible for the young, talented and amiable Prince Adeyeye Enitan Ogunwusi to reign without fighting any war with his neighbours.
The Ife-Modakeke wars defy logic. How can the Ife people tolerate people of other tribes like the Igbos and Hausas if they cannot tolerate the people of Modakeke who are also Yorubas?
There is no gainsaying the fact that Ile Ife is the cradle of Yorubaland. Tolerance and accommodation of Modakeke becomes imperative if the new Ooni must justify this enviable position. It is a lofty status which the Ooni must exploit to stamp his royal authority on the rest of Yorubaland and also to enjoy the confidence of the latter.
The new Ooni is the representative of Oduduwa, the ancestor of the whole Yoruba race. By implication, therefore, the Ooni is the father of Yorubaland. Engaging in internecine war with its neighbour certainly diminishes this historical status. The new father of Yorubaland must open his arms to embrace all Yorubas, including Modakeke.
All Yorubas must be welcome in Ile Ife. It is their ancestral home. There is no city in Yorubaland that does not trace its origin to Ile Ife. If, therefore, the Modakekes have come to Ile Ife sometime in the past as a result of pressure and the need for resettlement, they have come to the right place, the place from which they originatedab initio.
MURIC charges the state government to lift Ile Ife from its current state of economic comatose. Ile Ife has a basically agrarian population. The farmers should be given direct assistance in order to boost food production. The state government is advised to pursue aggressive investment push for the city so as to open the door of employment for the youths.
The cradle of Yorubaland deserves the state government’s proper attention, not crumbs from the table. Posterity may find it hard to forgive state governments which push Ile Ife to the background in the scheme of things in Osun State.
The new Ooni is advised to avoid interfering in religious issues or meddling in the murky waters of politics. He should focus his attention only on those things capable of promoting the development of his people.
The open romance of the late Oba Sijuade with former President Goodluck Jonathan and his ruling party brought the city into confrontation with the state government with the attendant dashing of hopes, frustration of the youths and retardation of development. The new Ooni is advised to tow the path of diplomacy for the progress of Ile Ife.
In the same vein, the undue interference in the affairs of the Ile Ife chapter of the Ansarudeen Society of Nigeria which led Oba Sijuade to order the replacement of the society’s choice of Imam, the sanctioning of the society’s chairman in Ile Ife and the closure of the society’s mosque at Ajamopo around 2006 was ill-advised. A traditional ruler, particularly a non-Muslim, who takes such steps against an Islamic society in his domain has gone too far. It should not happen again. The new Ooni should avoid actions capable of sparking religious unrest in his domain.
Professor Ishaq Akintola,
Director,
Muslim Rights Concern (MURIC)
Muslim Rights Concern (MURIC),
234-803-346-4974