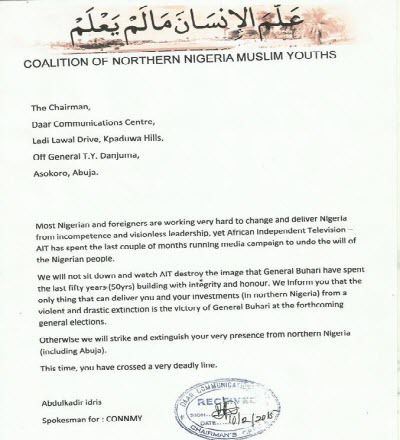 DAAR Communications, owners of AIT network, the TV station that was recently caught annulling a poll because Buhari won on fake premise of fraud, has now again upped its ante by circulating a fake letter from a fake purported group, “claiming to want to bomb the facility for its airing the fake and libelous discredited video that was highly unsuccessful in denting the Buhari/Osinbajo image.

It will not be surprising if the president’s friends in MEND and Boko Hara help them throw a small bomb at AIT to further push this desperate agenda as part of president Jonathan’s 6 week marshal plan to win rig and win the upcoming presidential elections.

The public is wiser.