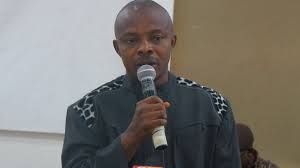 NIGERIA Labour Congress, NLC, faction led by Joe Ajaero, weekend, dissociated itself from the anti-corruption protest being planned by the National Assembly, which already received the backing of the Ayuba Wabba faction, saying there were several things wrong with the planned protest.

Ajaero’s group said among others, for Nigerian workers, the most pressing issue was unpaid salaries and allowances to workers and pensioners by state governments and some federal agencies.

Reacting to report credited to Mr. Wabba that NLC would collaborate with the National Assembly over its planned protest in support of President Muhammadu Buhari’s anti-corruption war, Ajaero, argued that it would amount to hypocrisy to work with the legislators who had refused to reduce their outrageous pay and allowances in line with the mood of the nation which labour was planning to protest against.

Speaking to Journalists in Lagos, Ajaero contended that in the spirit of thereconciliatory process anchored by Governor Adams Oshiomhole of Edo State and NLC veterans led by Alhaji Hassan Sumonu, both parties ought to have met to iron out certain fundamental issues and do some in-house cleansing before taking such action.

According to him, “To collaborate with the National Assembly to protest against corruption when they have not allowed their salaries to fall in line with the minimum wage, is wrong. If we do that, that is hypocrisy at its highest level. I am saying this without mincing words, the two NLC factions can still meet and agree on a date to protest in support of anti corruption moves of President Buhari but not to be hypocritical about it.

Before we do that, we must cleanse our house; we must make sure that the allegations over the Kriston-Lally Housing issue, over the labour city transport issue, and NLC election rigging and all others that have been destroying labour are cleared. Part of the issues that Comrade Oshiomhole and others looked into and which we all agreed to, was that we must go through the ethics of the movement, the rule of law and procedures in handling issues. If we have not gone into all these ones and we want to play to the gallery that we are protesting in support of anti-graft, we think the public will mock us and that is not the kind of NLC some of us want to see.

“The issue is that the other party (Wabba faction) did not consult us. They were supposed to consult before we even take certain decisions in the spirit of reconciliation. No party was supposed to fix a date to take an action without the two factions rubbing minds.

“But if one party goes out and takes a decision, it may be a good decision, but that may not be in line with the ideals of the other faction. We just read it in the papers and definitely we have to respond to it that we are not a party to a rally with the National Assembly. I have never seen where this collaboration worked before, unless we do not want to be sincere with ourselves, especially when we are even planning to picket the National Assembly on the jumbo pay.

“At what point did we drop that idea of picketing the National Assembly over the furniture and wardrobe allowances and when workers salaries have not been paid. The two cannot work. If you understand the labour movement very well, that collaboration cannot stand. It is a collaboration based on deceit and not based on the ideals of labour.”