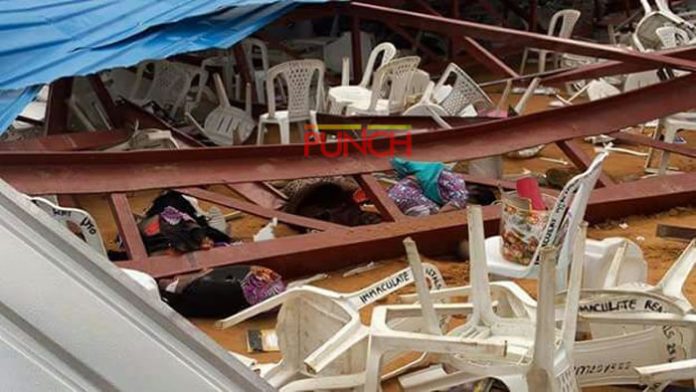 Lagos based human rights lawyer Mr. Inibehe Effiong has written a letter to the Akwa Ibom State Commissioner of Police demanding the immediate and unconditional release of Mr. Idorenyin Daniel Udoh the roof contractor who handled the roofing of the uncompleted building of the Reigners Bible Church International in Uyo which collapsed on Saturday, December 10, 2016 killing and injuring several guests and worshippers during the bishopric consecration ceremony of the Founder and General Overseer of the Church, Apostle Akan Weeks.

In a four pages letter dated 30th December, 2016 with Reference No. PT/01/IEC/2016 to the Akwa Ibom State Police Boss, the lawyer expressed dismay that his client who voluntarily went to the State Criminal Investigation Department to make a statement following the collapse of the uncompleted building has been arbitrarily detained since the 12th of December, 2016. The letter reads in part ‘’Our Client was hired by Apostle Weeks to construct the Steel Roof/Truss of The Church which he did diligently, in strict compliance with the specifications laid down in the structural design and in accordance with global best practices.’’

‘’Sir, while the tragic event of 10/12/2016 at The Church and the resultant fatalities and injuries are highly unfortunate, it is apposite to set the records straight as it pertains to the role played by Our Client in the construction.’’

‘’First, the contractual relationship between Our Client and Apostle Weeks for the construction of Steel Roof/Truss of The Church was birthed by an Agreement dated 29/8/2016 wherein it is provided inter alia: That the contract shall be completed within 10 (ten) weeks. Due to the failure of Apostle Weeks to satisfy his financial obligations under the Agreement and delays in the other components of the construction, Our Client could not meet-up with the agreed timeline for the project.’’

‘’Second, owing to the overwhelming pressure mounted by Apostle Weeks, who was emphatic that not only must the uncompleted building be used for the bishopric consecration but must also be conducive for his invited guests, especially the governor of Akwa Ibom State, Deacon Udom Gabriel Emmanuel, the construction work at the site was hurriedly done both day and night.’’

‘’Third, it was Apostle Weeks who personally, expressly and vehemently ordered the removal of the main scaffold that supported the drum at the centre of the building less than 24 hours before his abortive consecration. That action ostensibly contributed greatly to the collapse of the building. Our Client did not only refuse to remove the scaffold as ordered, he drew the attention of the site engineer, Engr. Anietie Augustine Ndarake and one Engr. Uwem Okoko to the directive of Apostle Weeks. All entreaties by Our Client to Apostle Weeks to rescind the removal order and allow the scaffold to remain fell on deaf ears. Mr. Weeks proceeded to order another person, a certain foreman by name Itohowo Essien, who was also working at the site to remove the main scaffold and paid him the sum of N50,000.00 (Fifty Thousand Naira) for complying.’’

‘’On 12/12/2016, Our Client voluntarily submitted himself to the State Criminal Investigation Department (State CID) where he was made to make a statement on his role in The Church building construction. Our Client in his statement to the police at the State CID stated inter alia: That it was Apostle Weeks who ordered and paid for the removal of the main scaffold that supported the structure. After his statement was recorded, Our Client was detained that day at the State CID where he is still being held (more than 18 days or 432 hours) in gross and inexplicable infringement of his fundamental rights, particularly his rights to: dignity of human person, personal liberty and fair hearing guaranteed by Sections 34, 35 and 36 of the Constitution of the Federal Republic of Nigeria 1999 (as amended), respectively.’’

‘’Our Client is a law abiding citizen of the Federal Republic of Nigeria with no past criminal record whatsoever. As a qualified, trained and highly experienced welder trained by the Maritime Academy, Oron and Slawd Peters, Etinan, in Akwa Ibom State, Our Client has successfully executed several prominent roofing contracts without any unpalatable incidence being recorded. Just for the records, please note below few of the past places where Our Client executed roofing contracts which can be easily verified:

Mr. Effiong further stated that the rule of law should be respected in the matter as Nigeria is a country of laws and not a jungle. ‘’Sir, you will agree with us that irrespective of the opinion held by the Nigeria Police Force, the Governor of Akwa Ibom State who publicly ‘ordered’ the arrest and detention of Our Client, or by any other authority or person about the immediate and remote causes of The Church building collapse, the due process of law must be adhered to without equivocation. Nigeria is a country of laws and not a jungle. In this country, it is the Rule of Law and not the rule of force that reigns supreme. The world had long graduated from the Hobbesian state of nature where life was short, nasty and brutish, based on the survival of the fittest, to an era of constitutionalism.’’

The fiery human rights lawyer expressed his disappointment with the decision of the police to detain the roof contractor for such a long time without trial when the ‘’prime suspect’’ and Founder of the Church, Apostle Akan Weeks is walking freely with police protection, paid for with tax payers money. ‘’Painfully, the prime suspect in this matter, the person whose illegal, reckless and desperate decisions, acts and omissions crystallized and contributed greatly to the disastrous incident of 10/12/2016; the very person that ignored several STOP WORK notices placed by the Uyo Capital City Development Authority (UCCDA) on The Church, Apostle Akan Weeks, is walking freely, protected by the men of the Nigeria Police Force, funded with tax payers money.’’

“We are aware that some other persons who worked directly in the construction site were immediately released on bail after making statements to the police. The attempt to use Our Client as a scapegoat in this matter is intolerable.’’

Mr. Effiong drew the attention of the State Police Commissioner to the threat to the health and life of Mr. Udoh who he said is suffering from Asthma and gave the police 48 hours to set him free or face legal action. ‘’We consider the arrest and arbitrary detention of Our Client as a slap on the face of the Nigerian Constitution and democracy. There is no legal, moral or logical justification for the unconstitutional manner Our Client has been treated. We are confident that you will abide by the reformative policies of the Inspector General of Police as it relates to illegal detention of suspects beyond the period allowed by law, which is 24 hours.”

‘’As a postscript, we wish to advert your mind to the fact that Our Client is suffering from Asthma and is presently unable to access proper medical care. You may wish to interface with the Investigating Police Officer (IPO) of the case (one officer Raymond) who is in custody of the inhaler belonging to Our Client. Our Client’s health and life are in serious jeopardy.”

“In the light of the foregoing, we respectfully demand that you should immediately and unconditionally direct, cause or effect the release of Our Client from custody within 48 hours of receiving this letter/application. Our Client undertakes to present himself whenever required, either in the police station or in court. Kindly Take Notice that if this application is not granted as prayed, we shall explore all available legal options that are available to Our Client.’’ Effiong concluded.

The letter was copied to the Assistant Commissioner of Police, Police Complaint Response Unit, Force Headquarters, Abuja; the National Human Rights Commission (NHRC) and the Network on Police Reform in Nigeria (NOPRIN).