Akwa Ibom State Has No Legitimate Governor, What Buhari Needs To Do Urgently, By Inibehe Effiong 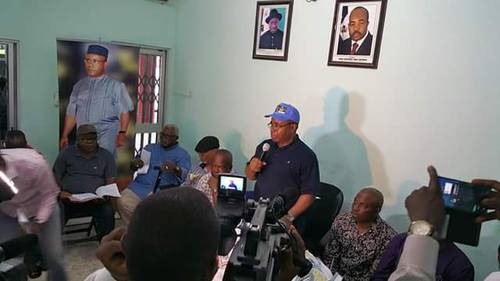 As the entire country is currently engulfed in flames of joy and rejuvenation of hope for a better nation birthed by the inauguration of General Muhammadu Buhari as the President and Commander- in -Chief of the Armed Forces of the Federal Republic of Nigeria and new State Governors, Akwa Ibom State stands out as a State without a legitimate transition of government.

Mr. Udom Emmanuel, a stooge of former governor Godswill Akpabio that was mischievously and violently foisted on the people of the State in what was clearly a state sponsored terror against innocent and powerless electorates of Akwa Ibom State during the massively rigged, internationally and locally condemned and bloody April 11, 2015 gubernatorial election in the State has subscribed to the oath of office of governor which he was never elected into by the people of the State.

Admittedly, rigging was not limited to Akwa Ibom State during the last general elections. However, the point has to be made that in the case of Akwa Ibom State, what took place was not an ordinary rigging but state sponsored terror perpetuated by former governor Godswill Akpabio in connivance with the highly compromised Resident Electoral Commissioner (REC) in the State, Mr. Austin Okojie and the overtly partisan State Police Commissioner, Mr. Gabriel Achong.

Determined to exercise my franchise and to have a first hand experience of the elections, I travelled all the way from Lagos State to Akwa Ibom State during the April 11 gubernatorial elections in the hope that our people will be allowed to freely vote for whoever they choose to govern them. Therefore, the opinion expressed here should be viewed as a testimony of someone who was actively involved in the electioneering process.

Like never before, thugs, touts and criminals armed to the teeth with sophisticated weapons in military and police uniforms went about from one polling booth to the other shooting, molesting, intimidating and killing voters and carting away election materials without any modicum of resistance. This terror was not isolated but replicated in most parts of the State.

How does one explain the fact that as at 10pm on the day of the election when collation of results should have been ongoing as expected, the headquarters of the Independent National Electoral Commission (INEC) in Akwa Ibom State situated along Udo Udoma Avenue, Uyo was locked, inaccessible and deserted? The video evidencing this is available on YouTube for all to see.

How does one explain the fact that Austin Okojie, the REC for Akwa Ibom State could not declare results for the House of Assembly elections in the State several days after the election? What excuse can be offered for the non issuance of certificates of return to the supposed winners of the House of Assembly elections until 25 days after the polls when Section 75 of the Electoral Act 2010 (as amended) states that certificates of return shall be issued within 7 days of polls?

Apparently, after declaring shambolic figures to please his benefactor; Godswill Akpabio, the REC was unable to reconcile and allocate figures for the House of Assembly elections which were held the same day with the governorship election. This resulted in a stalemate.

Is there any morally sensible or legally tenable explanation for the very huge disparity between the total number of persons accredited and the so called votes declared by the INEC for the gubernatorial election in Akwa Ibom State?

Official documents obtained from the INEC headquarters in Abuja shows that only 437, 128 persons were accredited by Card Readers to vote during the April 11 governorship elections in Akwa Ibom State and Guideline issued by INEC in Abuja and signed by the Secretary to the Commission, Mrs. Augusta C. Ogakwu on 2nd April, 2015 stated that only Cards Readers would be used for 2015 governorship elections in the country and that elections should be rescheduled in places where the Card Readers failed. There was no single case of rescheduled election in Akwa Ibom State, which implies that the Card Readers worked perfectly.

Is there any morally sensible or legally tenable explanation for the very huge disparity between the total number of persons accredited and the so called votes declared by the INEC for the gubernatorial election in Akwa Ibom State and where on earth did the corrupt REC get the voodoo 996, 128 votes that he arbitrarily allocated to the candidate of the Peoples Democratic Party, Mr. Udom Emmanuel who is now parading himself as the new governor of Akwa Ibom State?

Why should the REC, who ordinarily should be an unbiased umpire, refuse to comply with the valid orders of the Governorship Election Tribunal in Akwa Ibom State directing INEC to give the All Progressives Congress (APC) and its candidate, Obong Umana Okon Umana who had filed petition challenging the outcome of the election, access to all materials used the election for inspection and forensic analysis? Is Austin Okojie above the laws of this country?

How come that the State Police Command led by Gabriel Achong and the REC, Austin Okojie have been allowing the duo of Mr. Uwemedimoh Nwoko, immediate past Attorney General and Mr. Emmanuel Enoidem Esq., the immediate past Commissioner for Special Duties in the State to continually enter the INEC headquarters with retinue of thugs to disrupt the inspection of election materials as ordered by the Tribunal?

Given this state of affairs, is it right to accept and address Udom Emmanuel as the “elected governor” of Akwa Ibom State? Are we to accord respect to an office that is being occupied illegitimately by a product of impunity, criminality and gross electoral malfeasance? Even if we are to address Udom Emmanuel as a “governor” for the sake of officialdom and legalism, will it be wrong to equally refer to him as an impostor?

No nation has ever prospered through impunity, lawlessness and corruption. Nigeria has been through the precipice of leadership failure, bad governance and political shenanigans as exemplified by the Jonathan’s regime which has now come to an inglorious end.

The only way those of us, especially from the so-called minority regions, who risked our lives and rejected ethnically and religiously contrived idiosyncrasies which were skewed towards undermining the electoral credentials of President Buhari will be vindicated is if our new president actually does things differently. The whole idea of change presupposes that things will be done differently.

Therefore, it is my humble, strong and considered view that Akwa Ibom State offers President Buhari an opportunity to make a decisive statement; that the days of lawlessness and impunity are over. President Buhari needs to muster the political will to order the immediate arrest and prosecution of Austin Okojie, the Akwa Ibom REC who believes that he is above the laws of this country. Also, characters like Gabriel Achong should be shown the way out of the Police Force if the current administration’s reform agenda must succeed.

The fact that someone like Achong, who I have had a personal and terrifying encounter with, rose through the ranks to become a Police Commissioner is a testament to the level of decay in the Police Force.

Apart from holding Akpabio accountable for the hundreds of billions of naira that accrued to Akwa Ibom State from May 29, 2007 to May 29, 2015 which he dissipated thoughtlessly, we also expect Buhari to use Akpabio to set an example that it is a crime to use violence to rig elections. The blood of innocent Nigerians wasted under Akpabio through politically motivated assassinations must be probed into and we deserve to know who murdered those persons.

As at today, there is no legitimate governor in Akwa Ibom State, the impostor that is presently occupying the governor’s office will not stay long. We rest our hope for justice on the Judiciary. Sooner than later, a fresh election that will truly reflect the wishes of Akwa Ibom people will be held under the leadership of President Buhari.