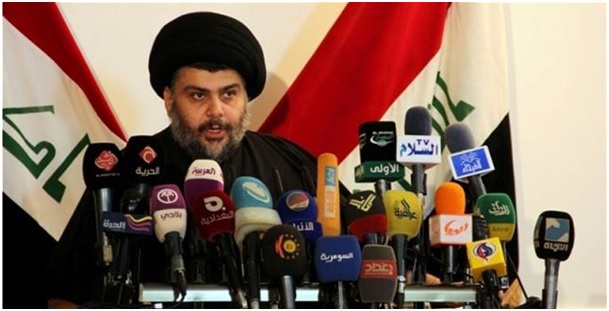 Baghdad (IraqiNews.com) On Wednesday the leader of the Sadrist movement, Muqtada al-Sadr, called to accelerate the formation of a new national government that is inclusive of moderate Sunnis and Shia and for a joint denunciation of terrorism. He rejected the participation of any members of “terrorist organizations and Saddam’s Baathist party members” in any dialogue about the political inclusion of Sunni Muslims.

Al-Sadr said in a televised speech addressed to the Iraqi people that was observed by an IraqiNews.com correspondent, that “the government should honor the legitimate demands of peaceful Iraqi Sunnis moderates who have suffered marginalization and exclusion,” calling to “accelerate the formation of the national government with new faces from all walks of life and far from sectarian quotas.

Al-Sadr called for “a unified denunciation of terrorism by Iraq’s Sunnis and Shiites and that there should be a charter and a covenant between these religious groups,” adding that “interference by terrorist organizations and Saddam’s Baathists in this dialogue is forbidden; they are rejected by everyone. This does not mean the exclusion of the Sunnis.”