“Nigerian President Muhammadu Buhari has warned of what he called Iranian missionary activity in Africa, which he said posed an increased danger by spreading information aimed at ‘sowing division and sectarian sedition and unrest.

“And Buhari, launched a new warning against Iranian activity promoting what he described as revolutionary ideology in Africa.”

NewsRescue is unable to verify from any other source that Nigeria’s president at sometime during his visit to the Arab world made such ridiculous and improper statements. We have been unable to get affirmative responses form the Presidency

I picked these statements from a Saudi link (AlArabiya English) of a comment attributed to the Nigerian President Buhari who seems to be the new Saudi hunting dog of Africa.

I do not see this in his speech to the Saudi tyrant-leader, so maybe he made this observation in private and his self assumed Saudi masters who are desperate for support against Iran decided to make it public.

It is important to note that Nigerian President Muhammadu Buhari recently killed 1000+ defenseless & unarmed Shia Muslims in Zaria, Nigeria, destroyed the iconic Zaria Husseiniyya, destroyed the residence of the Nigerian Islamic scholar Sheikh Ibraheem Zakzaky and went on as unbelievable as it sounds, to exhume graves of the oppressed minority Muslims in Darul Rahma.

It is also important to note that these words that he used “sowing division and sectarian sedition and unrest” were the same words the Saudi Foreign Minister used recently while attacking Iran. It does not come as a surprise that the Nigerian President Buhari is repeating verbetim the same words of the Saudi FM.

In the past I thought the Nigerian President Buhari is a Pharaoh who makes decisions on his own and is a master of himself but with these statements I realized that he is not even fit to be an American hunting dog, he is a hunting dog of the House of Saud in Africa. The implication of this is that he will receive all orders not from Washington but from the palaces of the House of Saud. This is the ignominy that the Nigerian President Buhari has brought upon himself and unfortunately upon the Nigerian nation.

With this statement by the Nigerian President Buhari, he has relegated the great nation that was Nigeria that all African countries respect to a Banana Republic under the control of Saudi savages who are primitive-minded to say the least. Why should the President of Nigeria repeat verbetim the words of the Saudi Foreign Minister against Iran? Does this old man of 70+ have no shame or honor? Does he think that been a hunting dog of the House of Saud will bring any glory to him?

And if I may ask what is the business of the President of a nation like Nigeria that is a secular state on the Sunni/Shia divide? Is he not suppose to by laws of Nigeria be neutral and be just to all? Why should this old man dragged Nigeria into the bloody sectarian agenda of the Saudi Wahhabi regime? And why did this old man killed 1000+ defenseless & unarmed Shia Muslims and buried them in mass graves to bury the evidences? Is there any “sectarian sedition” greater than killing 1000+ Shia Muslims that included women, children and the aged? Does this old man desire a bloody sectarian war in Nigeria as that is the wish of the traitorous House of Saud? 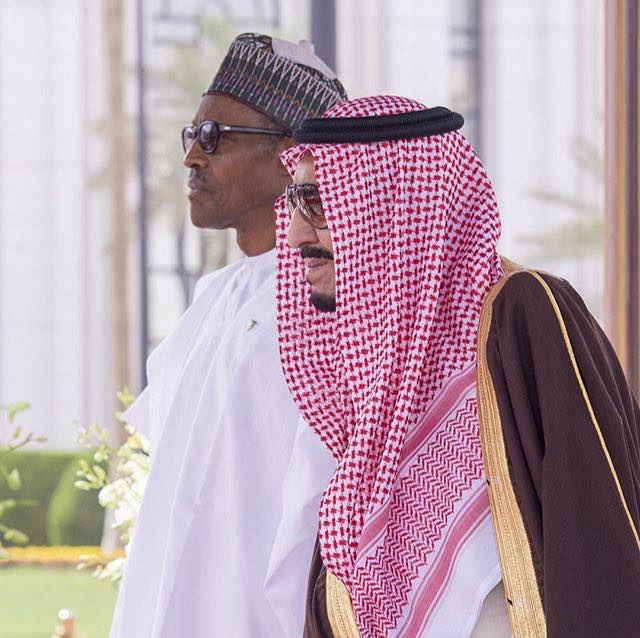 Finally, it is a duty of all Nigerians to protect and defend the freedom and independence of their country. Nigeria is not a Saudi Emirate and Nigeria will never be a Saudi Emirate! The Nigerian President Buhari has chosen to be a Saudi hunting dog but we have chosen to remain Nigerians and only Nigerians. Nigeria has lots of problems that needed urgent attention, a good and responsible leader should be thinking on how to solve these problems and not to add more problems to Nigeria just to serve a foreign evil agenda.