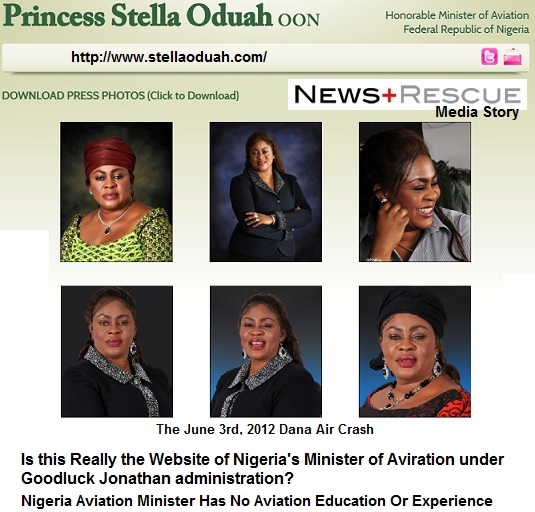 Nigerian security and anti corruption agencies have been alerted on the Massive mismanagement of multimillion dollars account of the Bilateral Air Service Agreement(BASA) by the top management of FAAN and the Minister of Aviation, Princess Stella Oduah. According to officials of a coalition of civil society Organisations – Whistleblowersmonitors inc , in a petition to the EFCC and the Commissioner Special Fraud Unit (SFU),Nigerian Police, the fraud which was reported by one of its affiliates indicated that$76 million has been spent without approval of relevant authorities of government on projects which were not approved in the national budget.

The petition stated interalia ” ….This amount which is in excess of N11billion has been spent over different contracts awarded by the Minister of Aviation Mrs. Stella Oduah and the Managing Director of FAAN Mr. George Uriesi without following due process, no approval of the Bureau of Public Procurement (BPP), no due process certificate issued, and no federal Executive Council approval. These spending were neither budgeted nor appropriated in the 2012 Budget passed by the National Assembly (copy attached), had no Federal Executive Council Approval and did not comply with the spending limits allowed by the delegated financial authority of the Government.

Related: NewsRescue– Falana to Aviation Minister Stella: Who is the ‘VIP’ that Delayed Arik Landing?

Under the law, the procedure for accessing and spending from the Bilateral Air Service Agreement (BASA) fund required that any expenses from this fund must be budgeted in the annual budget, appropriated by the National Assembly and approved by Mr. President. Unfortunately, since the resumption of Mrs. Stella Oduah and Mr. George Uriesi as Minister of Aviation and Managing Director of FAAN respectively, this has not been done. Today, over $76million and another $13million have been diverted to various projects without following due process and the laid down procedures in the Bureau for Public Procurement Act. These contracts were neither publicly advertised nor contained in any of the Federal Government’s Tenders & Procurement bulletins.

As at 2006, the BASA fund held in the CBN was $86,202,875.02 however by 2010 this amount had dropped to $76 million. The unfortunate thing is that between 2010 and April 2012, the $76 million fund had simply vanished. Rather than apply the money to verifiable physical projects, the money is being shared and used to pay for unbudgeted pseudo claims, expenses and unapproved projects. For instance in February 2010 or thereabout $6 million out of the balance standing to the credit of the BASA fund was claimed to have been used to pay Hydro Air Cargo for damages to its aircraft when it landed at the Murtala Muhammed International Airport in November 2003. The real truth however is that this money was only taken out using Hydro Air Cargo as an excuse for the money to be shared by the Managing Director of FAAN and top officials of the Ministry of Aviation.

In order to confirm the veracity of this petition, the SFU is urged to investigate into the following:

1. Why was the claim by Hydro Air Cargo for the damage to its aircraft not referred to FAAN’s insurer by the management of FAAN for settlement?

2. Has FAAN not been paying its insurance premium to allow it enjoy full indemnity for the accident of Hydro Air Cargo?

4. Request for all documents relating to the claims made that $6 million was paid to Hydro Air Cargo

5. Investigate the account into which the payment was supposedly paid and to also investigate the persons directly involved in the transaction. Note how the $6million was “share” once it entered into Hydro Air Cargo Account.

Now that the $76million has been diverted and spent, the Federal Ministry of Aviation has now devised a new method to further divert and spend all the current BASA income of over $80million received from the foreign airlines operating into Nigeria. For instance the recent payments by airlines such as Lufthansa, British Airways, Emirates etc amounted to over $80million are now being diverted. This alarming situation of complete depletion of the BASA fund without any appropriation from the National Assembly or approval from the Presidency or Federal Executive Council or Bureau for Public Procurement is worrisome. We therefore call on the SFU to avert this dangerous trend from continuing.

The SFU is invited to conduct an investigation into how all the money received from the 25 international airlines that paid BASA fees between 2010 and April 2012 were diverted during the stewardship of Mrs. Fidelia Njeze and the present Minister of Aviation, Mrs. Stella Oduah. This fund which included about $13.5million paid by Lufthansa as contained in a letter from the Ministry of Aviation reference FMA/ATMD/501/S.I/104/XI/1153, $12 million paid by British Airways and various amounts paid by the other airlines all totaling over $80million were spent and diverted into various fictitious accounts under the guise that there is a Presidential approval for the spending of BASA fund.

Again, the Agency is invited to investigate the actual amounts invoiced to and paid by these airlines as well as the accounts into which all these BASA fees were paid, how these fund was appropriated and the approvals obtained for appropriation – the BASA fund had been converted for both capital and recurrent expenditure against the approval guidelines for the management of the fund. All they do is issue payment to any of these contractors without following due process and then share the proceed with the company.

SHARING OF THE LOOT

Having successfully gained access to the BASA fund, the Honorable Minister of Aviation seemed to have perfected acts of sharing the loot. Instead of using the BASA fund to develop the industry, money in the BASA account simply found its way into private bank accounts of contractors and the accounts of some parastatals under the Federal Ministry of Aviation, particularly that of FAAN. An example is the N3 Billion out of the BASA amount that was paid into FAAN HQ Main Account No. 1012771229 at Zenith Bank on February 8, 2012. This yielded an interest of about N420 Million which was not appropriately credited to any FAAN Account but was fraudulently shared by the MD of FAAN, Hajia Nana Aliyu – 08037874204 (Ag. Director of Finance & Account), a Director in Zenith by named Mr. Peter Amangbo, and other persons.

The N3 Billion was placed in an interest yielding deposit account, but cunningly put in the Current Account to deceive innocent looker. This fact can be easily confirmed since the N3 Billion that was put in the Zenith Account no. 1012771229 in February 2012 still remain so till today without interest accruals. This is not surprising, as it has been an established practice in FAAN to keep money in interest yielding accounts only for such interests to be diverted into the private accounts of top executives of the parastatal. FAAN is used to under declaring interest income for example in 2010 FAAN placed N1.7billion in Zenith Bank Plc Account no. 6011520927 where accrued interest was understated and the proceeds shared by senior officials including the erstwhile Managing Director, the former Director of Finance & Account and immediate past Director of Airport Operations now Managing Director, Mr. George Uriesi.

A further check confirmed that this N3 Billion was used by the Honorable Minister of Aviation, Mrs. Stella Oduah, to secure a loan from Zenith Bank to buy a Ship for the operations of Sea Petroleum & Gas, her company. This is a great abuse of office!

MISAPPROPRIATION OF CONSTRUCTION AND MAINTENANCE FUND

FAAN maintained an Account they referred to as Construction and Maintenance Account. This Account is used to warehouse monthly allocations to all the 22 Airports in the country. The Account is maintained at Finbank Nig Plc now FCMB Plc and a total of over N3.3Billion was transferred to the Account from Lagos operations alone from January 2008 to April 2012. However, the usage of this funds remains questionable as it is a general knowledge that the Airports are greatly rundown and cry for allocations to run the Airports which accounts for the decayed infrastructure at the Airports.

It is on record that the Murtala Muhammed Airport generated as much as N43 Billion in the 5 years between 2008 and 2012, one would however expect that 10% of these amount would be set aside for maintenance of this airport. It is sad to note that moneys earmarked for maintenance of airports are taken out and misappropriated. There is no better way to describe the level of corruption in FAAN that has affected airports maintenance than in the words of Mr. Edward Olarerin the Airport Manager of Murtala Muhammed International Airport who said: ‘It will be very wrong for me to say there is no corruption at the Murtala Muhammed International Airport. We generate so much but we don’t get this money. It is frustrating for me when I cannot produce what I generate at MMIA……. Corruption is also exhibited among the lower cadre of staff; it affects every hierarchy’ quoted in Thisday Newspaper of 17 June 2010.

The petition signed by Sulaiman Kazeem, National Co-ordinator,also fingered the DG of one of the Aviation agencies in money laundering scam while another Director, a lady was said to have faced criminal prosecution in a USA court, a fact she hid from Aviation authorities.