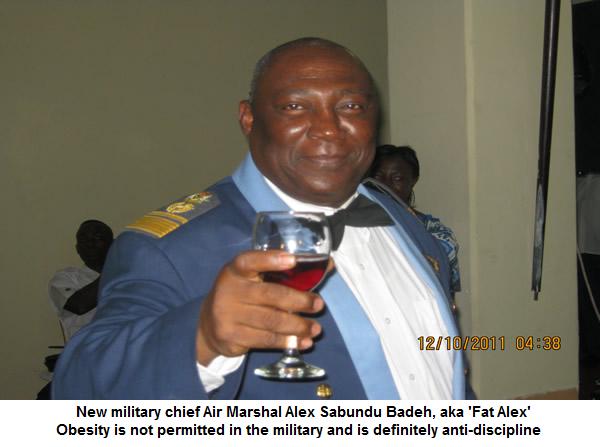 In an episode that was full of shamelessness, hypocrisy, lies, and disgrace, the former Chief of Defence Staff, Air Chief Marshal Alex Sabundu Badeh, was given a platform yesterday in Abuja, among the military fraternity, where he alleged that the failure of the Nigerian military under his leadership, to defeat Boko Haram, was primarily due to powerful fifth columnists in the service, who he claimed were passing intelligence to Boko Haram!

So Alex Badeh knew the existence of powerful fifth columnists in the military, but why did he chose to keep quite all along? What stopped him exposing and prosecuting them? Could it be that Alex Badeh himself is the the fifth columnist?

Perhaps he forgot, can Alex Badeh explain to Nigerians what happened to the missing trillions of Naira of defence budged meant for equipping and training the military to fight Boko Haram? What about the exquisite mansions and estates built and owned by Alex Badeh in Lekki beach and Abuja? What about the alcohol driven sex parties hosted by Alex Badeh in Yola while he and his fellow generals were supposed to be in Borno state fighting Boko Haram? Can Alex Badeh explain the use of Nigerian military to prepare the Sambisa forest just few months before the Haramites moved in? What about the missing Chibok school girls and the subsequent sabotage of the American military to rescue them? Can Alex Badeh explain the massacre of Baga where more than 3,000 innocent lives perished? What about the occupation and destruction of several towns in the North East that includes Bama, Madagali, Michika, Askira, Uba, and Mubi among others? Was it not Alex Badeh who sent military helicopters to evacuate his family from Vimtim, a suburb of Mubi, just few hours before the Haramites moved in to occupy and destroy the multi-billion commercial city? What about the thousands of gallant Nigerian military officers who were ill equipped and ill trained, but were forced to confront the well equipped Haramites to face certain death? What about hundreds of military personnel who were unlawfully sentenced to death for refusing to fight Boko Haram while ill equipped? What about the Chinese made military helicopters that crashed in Yola carrying millions of USA dollars and foreign pilots who tried to burn the crashed helicopters?

Because the full arms of the law is yet to catch up with this thoroughly shameless and dis-ingenuous ex-military general, he had the audacity to insult the collective intelligence of 180 million Nigerians by abdicating himself from the full responsibility of his treachery and failure. If the gospel truth were to be told, which we at CUPS are not afraid of telling, there has never been a bigger and nastier fifth columnist in the Nigerian military history than Alex Badeh.

Alex Sabundu Badeh, carry on with your self denial and grandeur delusion. The full arms of the law will catch up with you sooner than you think.

May God save Nigeria and Nigerians.