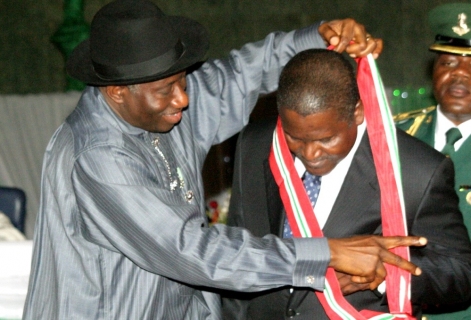 The culture of bequeathing National Honours and or Awards to deserving individuals who have contributed in one way or the other towards uplifting the circumstances of any country is a practice that dates back thousands of years.

The practice serves two primary functions, firstly to appreciate such individuals for their dedication, industry, service or whatsoever contributions they might have made to the society’s development; secondly, and equally important, to serve as motivation to others to strive to the extreme of their abilities, to be equally recognized and honoured by the larger society.

Under ideal circumstances, the screening and selection processes of individuals who get nominated to receive national awards coupled with the accomplishments, integrity and contributions to societal advancement of selected awardees serve to enhance the stature of National Awards. The national Awards ceremony itself acquires a larger-than-life image as it is often a determining factor to gauge the direction towards which a society wants its youth (and invariably, its future) to be attuned.

Here in Nigeria, the annual ritual has come again and a date has been set when the Nigerian State has earmarked to dish out national honors to persons deemed to have contributed to Nigeria’s development. An event will be organized in a venue decked out with spectacular decorations at costs best left unstated (for a certainty, new millionaires have been created, and invariably prospective national honor awardees/honorees, from contracts awarded in relation to the events). The awardees/honorees themselves will storm the venue, attired in a cacophony of colors and bedecked in all manner of jewelry and some adorned with the plumes from species of endangered birds. Platoons of operatives of security agencies will serve to cordon off the venue of the ‘national awards’ from the very Nigerians who ought to be ‘celebrating’ persons who have so contributed to our nation’s development. All manners of praise singers, hanger on and alms seekers will for an outer ring of perfidy around the venue of the national awards ceremony.

Though the criteria for dishing out national awards seem known only to a select few Nigeria (it is highly doubtful if any such objective criteria exists), from the list of awardees in the past few years, it is discernible that attainment of certain political offices and positions in the civil service, automatically guarantees a national honor. The Offices so entitled to automatic national honors include: President of the Federal Republic and his Vise, State Governors, Senate President, Speaker of the House of Representatives, Chief Justice of the Federation and Justices of the Supreme Court, President of the Court of Appeal, Chairman of the ruling political party, Secretary to the Government of the Federation, Service Chiefs and heads of para-military and security agencies, Permanent Secretaries of Federal Ministries, and a couple of other choice positions. Becoming an Chief Executives Officer or Board Chairman of firms which are able to secure juicy contracts with government also guarantees one a national honor. It is however instructive to note that the national honors are dished out irrespective of how some of these characters attained the various offices which ‘guarantees’ them a national honor.

We are thus faced with the unsavory situation where for instance, persons who shot their ways to becoming Heads of States, via coup d’état, or violently rigged the electoral process to become President of the Federation or Senate President or any other such political offices. Also given awards under our blanket system of honoring offices attained, as opposed to actual contribution made to national development, are persons who preside over security outfits that have attained global notoriety for extra-judicial killings and extorting the very citizens they are set up to protect, Senior civil servants who despite their modest salaries and emoluments are able to live the lifestyles of drug barons by corruptly enriching themselves from public coffers and executives of contracting firms whose main modus operandi and sole secret of success is bribe giving and blackmail. The Nigerian system chooses to close its eyes to the fact that if the coup plotter, election rigger, incompetent security chief, corrupt civil servant and mafia-like business mogul had been adequately prosecuted for their heinous crimes, such characters ought rightly be serving lengthy prison sentences or probably awaiting execution and certainly not fouling our national ethic with their incongruous presence.

Without any inhibitions whatsoever, officials of the Nigerian State publish to the international community, the list of personalities slated for national awards each year. The calamity of our situation is that when the list of candidates for the award of Nigerian national awards is juxtaposed with watch-lists of Nigerians at the disposal of international security organizations, such as the INTERPOL, Federal Bureau of Investigation (United States of America), the M16 (United Kingdom, Mossad (Israel) and other such bodies spread across the globe, for such crimes as Money Laundering and associated racketeering activities, there is a near perfect match. The prime immediate consequence of the publication of the list of persons to receive Nigerian national awards is the extra scrutiny and more thorough search of hapless Nigerians travelling through international border posts in Europe and the Americas – the logic, if your country honors and awards persons we have on our list as money-launders, drug traffickers and members of various international organized crime syndicates, ‘ordinary’ Nigerians need more thorough checks!.

Greater damage is impacted on our national psyche and sensibilities by the award of national honors to persons who least deserve such. The worst hit by these unfortunate misplacement of honors are our youths – the most impressionable segment of our population. As our various media houses (print and electronic) celebrate the award of national honors to these persons of unwholesome characters, our children and youth look on in perplexed amazement and bewilderment as they observe the celebration of vice and criminality. At the various places of worship and in their schools, these impressionable youths are taught that stealing and corruption are vices that should be avoided and yet they are graphically confronted with a nation celebrating the people who have stolen the most and benefitted the most from corruption.

In Nigeria, we seem to have perfected a penchant to transform virtue to vice, positive practices to negative nuisance, and the credible into the incredulous

Apparently aware of the dilemma of its double-speak, the Federal Government has of recent embarked on rather desperate efforts to attract credibility to its national awards festivities and thus erase the fact that as it stands presently, the awards ceremonies engender and promote criminality and corrupt practices. The Nigerian State went out of its way to seek to ‘bestow’ ‘national awards’ on persons of renowned accomplishments and integrity to dilute the stench emanating from the bulk of the awardees.

Rather unfortunately for the Nigerian State, and most fortunately for the need to restore propriety and give our nation and its youth hope in its tomorrow, most of such truly distinguished and to be received in the midst of filth. Of particular reference at this point is the rejection, officially for the second time, by internationally renowned writer and statesman, Chinua Achebe, of a national award from the Nigerian State.

Whilst going through the list of recipients of national awards for the year 2011 as published by a national newspaper, a youth who had been glancing over my shoulders to read the tabloid exclaimed: ‘Sir, that man on that list was nearly lynched in our community for diverting resources meant for the community to his personal use, I believe C.F.R. under which his name appears must mean Criminal of the Federal Republic”. His friend who had been standing idly bye chipped in:” Then going by the class of its recipients, G.C.O.N. must mean Grand Criminal of the Order of the Niger”  I could not help but inquire as to what the supposedly highest national honor in Nigeria meant, the G.C.F.R! The youths replied in unison, “Ahhhhhhhhh, he is the ababa nna of them all – “Grand Criminal of the Federal Republic”.