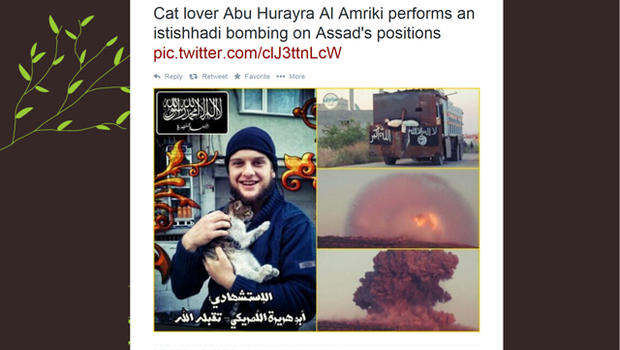 (CNN) — The truck was loaded with munitions, then driven up a hillside in northern Syria. Moments later, there was a massive blast followed by cries of “Allahu Akbar,” or “God is great” in Arabic, and the rattling of gunfire.

The suicide attacker in the bombing depicted in this online video was an American jihadi, radical Islamists claiming responsibility for the blast have said.

The man called by the nom de guerre Abu Hurayra Al-Amriki was a U.S. citizen, who grew up in Florida and went to school there.

Neither official would disclose the bomber’s real name. Investigators are interviewing family members.

Al-Amriki is among a group of Americans whom intelligence agents have been trying to keep tabs on since they went to Syria some months ago to join extremists in the fight against the Syrian government.

Abu Farouk al Shamy, a spokesman for the rebel Suqour al-Sham battalion, told CNN that the Sunday attack was executed in coordination with the al-Nusra Front, an al Qaeda-linked organization that the U.S. government has blacklisted as a foreign terror organization.

One video on YouTube, with the title “the American martyrdom from al-Nusra Front,” identifies the suicide bomber as Abu Hurayra Al-Amriki. This video and several other social media posts feature a picture of a bearded man with that name, smiling and holding a cat.

Al-Amriki in Arabic means “the American.” The name Abu Hurayra, which is popular among Sunni Muslims, offers little clue as to the man’s identity. Abu Hurayra was a companion of the Islamic prophet Mohammed and the narrator of Hadith.

Syrian activists say the video is from Sunday and shows militants’ preparations and ultimate attack on Syrian military checkpoints in Jabal Al-Arba’een, near the city of Ariha in Idlib province and believed to be along a key rebel supply route.