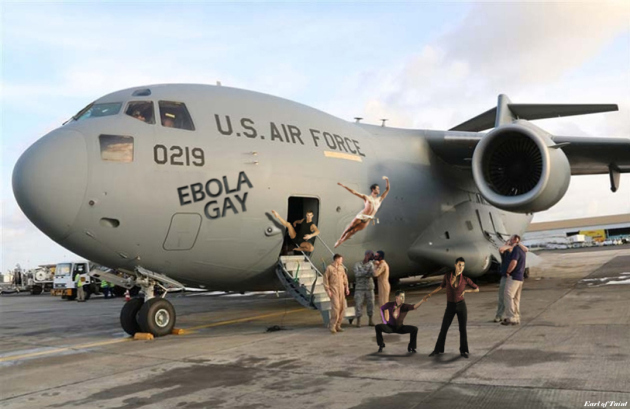 President Barack Obama has received a torrent of criticism for dispatching U.S. troops and National Guardsmen to the Ebola-ravaged West African countries of Liberia, Sierra Leone, and Guinea to help control the spread of the highly-lethal Ebola-Zaire hemorrhagic virus. While Cuba has sent qualified doctors to the stricken region, Obama has responded with troops answering to the U.S. Africa Command in Stuttgart, Germany.

Evidence has recently surfaced in a 2009 U.S. embassy Berlin cable to the U.S. State and Defense Departments that German authorities hesitated to send hemorrhagic fever cultures to the suspected biological warfare laboratory at the U.S. Army Medical Research Institute of Infectious Diseases (USAMRIID) in Fort Detrick, Maryland because the Germans feared the Army might «weaponize» the cultures.

«German MFA [Ministry of Foreign Affairs] Deputy Head of Division for Export Control Markus Klinger provided the following non-paper to Econoff [Embassy Economics Officer], seeking additional assurances related to a proposed export of extremely dangerous pathogens to the U.S. Army Medical Research Institute for Infectious Diseases. The Army’s end use certificate provided to Germany is lacking an official seal. Klinger’s deputy, Nancy Reck, noted that Germany had made two follow-up requests to the Army seeking assurances and clarifications related to this proposed export. The GOG [Government of Germany] seeks assurances from the USG [US Government] or US Army that the end use certificate and the information contained therein are legitimate and accurate».

The «non-paper» reference is to an «aide-memoire», what is known in the diplomatic world as a note without an author, source, or title that is used to prepare for negotiations. The following «non-paper», which was originally written in German, was translated by the embassy and sent to Washington:

Against the background of our partnership in the area of non-proliferation and our excellent cooperation in the matters of export controls, we would like to bring the following issue to the attention of your government.

A German firm has applied for the approval of the export of 184 genetic elements with nucleic acid sequences of viruses for the production of recombinant viruses. The viruses will be used in optical imaging to identify host factors required for viral replication. The recipient in the USA is, according to the enclosed end use certificate, the Department of the Army ‘US Army Medical Research Institute for Infectious Diseases (USAMRIID)’ Fort Detrick, Maryland.

Specifications in English about the goods, the recipient and end use can be seen from the end use certificate. The goods are controlled by the Australia Group and are subject to compulsory export approval (List position C1C353A). This matter concerns the complete genome of viruses such as the Zaire Ebola virus, the Lake Victoria Marburg virus, the Machupo virus and the Lassa virus, which are absolutely among the most dangerous pathogens in the world. The delivery would place the recipient in the position of being able to create replicating recombinant infectious species of these viruses.

Because of the particular criticality of these goods, the German federal government practices an exceptionally restrictive approval policy for such exports. An approval here can only be issued if an improper end use in association with the development or production of biologic weapons approaches can be foreclosed with a probability approaching certainty. The enclosed end use certificate is on the letterhead of the U.S. Army. The required official seal is missing, however. A decision about the export has not yet been made. Given the foregoing, we would appreciate confirmation that the end use certificate really is from the Department of the Army and of the accuracy of the data contained therein. We look forward to the continuation of our excellent cooperation in matters of non-proliferation and export controls.»

The German government specifically stated that the ability of Fort Detrick to «create replicating recombinant infectious species» of dangerous hemorrhagic viruses could violate international controls on the export of dangerous weapons of mass destruction that are enforced by the Australia Group of signatories to biological, chemical, and nuclear export treaties.

The Germans are in a position to be well aware of past U.S. involvement in biological warfare operations, especially in Zaire, where, in 1976, the first major outbreak of the Zaire Ebola virus, referenced by the Germans in their aide-memoire, occurred near the Ebola River in northern Zaire (now the Democratic Republic of Congo).

In 1976, while the CIA was experimenting with Ebola and HIV in Zaire as part of its illegal covert war against the Marxist government of Angola, Orbital Transport und Raketen AG (OTRAG), or Orbital Transport and Rockets, Inc., a Stuttgart-based West German corporation closely linked to West Germany’s Bundesnachrichtendienst (BND) intelligence service and the U.S. National Aeronautics and Space Administration (NASA), helped establish a huge 100,000-square mile rocket base in the Shaba (Katanga) province of Zaire.

The base was not only involved in launching rockets but also in providing the CIA with a base of operations against the Marxist government of neighboring Angola. The authorization for the CIA to use the OTRAG zone as a base of operations for its illegal support for right-wing guerrillas in Angola came from Secretary of State Henry Kissinger and the operations were carried out by CIA director George Bush.

OTRAG’s Zaire base was shut down in 1979 and it was relocated, courtesy of Libyan leader Muammar Qaddafi, to the Libyan Desert in 1981. Soviet leader Leonid Brezhnev was so concerned about the OTRAG base’s offensive capabilities he pressured French President Valery Giscard d’Estaing to weigh in with Mobutu to force the base’s ouster from Zaire. The German government’s present concern about the American weaponization of hemorrhagic fevers that have plagued Zaire/Congo indicates that Brezhnev was correct in suspecting the actual purpose of the OTRAG base. The first Ebola outbreak in Zaire in 1976 coincides with the start of operations at the OTRAG base.

The CIA’s longtime Technical Services Director, Dr. Sidney Gottlieb, who came up with various ways to infect CIA targets like Congolese Prime Minister Patrice Lumumba, Cuba’s Fidel Castro, and Iraqi leader General Abdel Karim Kassem with lethal toxins, admitted to a congressional hearing that as early as 1960 he disposed in the Congo River a large quantity of viruses to contaminate anyone who used the river for drinking water.

The U.S. embassy in Lusaka, Zambia was quick to report in an October 3, 2008 cable to Washington the outbreak of an unknown virus among six South African members of a safari group on the Lower Zambezi River that was caused by «person-to-person transmission may be via bodily fluids — vomit, saliva, blood, etc.» However, with only preliminary evidence from the CDC, the embassy was quick to rule out «Ebola, Marburg, and Crimean-Congo» as the cause of the illness of the South Africans.

The Walter Reed Johns Hopkins Cameroon Program (WRJHCP), based in Yaoundé, Cameroon, and involving both the CIA-connected U.S. Agency for International Development (USAID) and the U.S. Military HIV Research Program (USMHRP), has been closely «monitoring» Cameroon’s border with the Republic of Congo for Ebola and other hemorrhagic fever outbreaks.

It is not only in Africa that the United States is suspected of violating the 1972 Biological Warfare Convention by engaging in bio-weapons research. In addition to the United States, an October 4, 2008 cable from the U.S. Mission in Geneva to Washington stated that Ukraine, then under the rule of pro-NATO President Viktor Yushchenko, was insisting that compliance with the Biological Warfare Convention was the responsibility of «individual scientists’» adhering to unenforceable «codes of conduct.»

Another 2008 cable from the U.S. embassy in Manila describes how the U.S. Centers for Disease Control assisted the Philippines in examining the outbreak of the milder form of Reston Ebola in the Philippines swine stock. The Reston strain gets its name from a 1989 outbreak of Ebola at the Reston Primate Quarantine Unit in Virginia, near Washington, DC that killed a number of primates. The facility was linked to Ebola and Marburg virus research at Fort Detrick. Viral outbreaks in Southeast Asia, such as that Ebola Reston swine outbreak in the Philippines, also involved researchers from the U.S. Naval Medical Research Unit (NAMRU-2) in Jakarta, Indonesia. Several Indonesian health officials and politicians have charged that the U.S. Navy facility is not only involved in bio-warfare research but also directly assisting U.S. Big Pharma companies in research of airborne influenza, such as H5N1 avian flu, as well as anthrax, infectious bursal disease, and other pathogens.

Indonesian Health Minister Siti Fadilah Supari charged that NAMRU-2 was illegally sending biological specimens out of the country. Indonesian Foreign Minister Hasan Warijuda demanded to know why NAMRU-2 personnel enjoyed diplomatic immunity. Soeripto, the Deputy Chair of Parliamentary Commission III on Law and Human Rights, claimed that NAMRUs were a front for intelligence activities and called for NAMRU-2’s immediate closure. In 2010, the Indonesian government ordered NAMRU-2 to close and it was relocated to Pearl Harbor, Hawaii. NAMRU-2 maintains a detachment in Phnom Penh, Cambodia.

The Navy continues to maintain NAMRU-3 in Cairo, NAMRU-K in Nairobi, NSAMRU-6 in Lima, and a special detachment in Bangkok. These facilities are engaged in the same type of «research,» including of hemorrhagic fever and influenza outbreaks, which resulted in NAMRU-2’s «walking orders» from Jakarta. All these Navy units have relationships with the perennially suspect USAID, which maintains its own «Public Health Team.» Personnel from NAMRU-3 and the U.S. Air Force School of Aerospace Medicine in Landstuhl, Germany were sent to Kuwait in August 2009 to investigate the sudden outbreak of H1N1 swine flu among U.S. troops stationed at Camp Arifjan.

U.S. activities at Landstuhl, Stuttgart, Germany’s OTRAG base in Zaire, and a research institute seeking to export Ebola and other deadly pathogens to Fort Detrick have focused on Germany as a nexus for America’s quiet treaty-violating bio-warfare research. One single cable out of a tranche of 250,000 cables released to WikiLeaks has provided the «smoking test tube» for this illegal research that may be behind the current Ebola outbreak in West Africa.