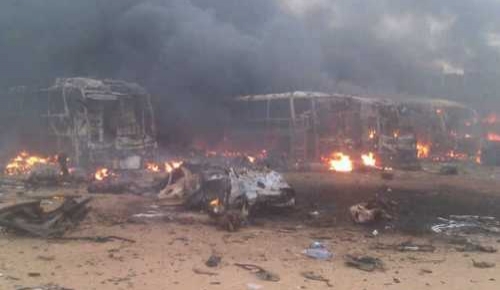 We greet you in peace, the president of the federal Republic of Nigeria. May Allah(S) in his infinite mercy guide you through a path that will preserve life and serve justice as is your duty.

We the MuslimsAgainstTerror.com send this message directly to your attention as an addendum to our earlier press release, “Boko Haram Amnesty: Shekau Must Face Shariah Judgement,”on the 21st of February, because we see that you have fallen into the trap of men for vain gain. (Ref: http://muslimsagainstterror.com/boko-haram-amnesty-shekau-must-face-shariah-judgement/)

The so-called Northern Elders impressed it upon you to offer a so-called amnesty to this cult and you fell for it, Wallahi, you all are misled and can only be doing this for personal gain, to win elections and not for the peace and progress of Nigeria.

You can not do another wrong to attempt to repair the series of wrongs of Nigerian governance. A so-called amnesty for Boko Haram cult, JAMBS (JAMA’ATU ANSARUL MUSLIMINA FI BILADIS-SUDAN) or any other terror group or affiliate is another dangerous wrong to compound a history of terrible wrongs and failures by your government and the governments before you that got us here in the first place.

The mentality of throwing money at every problem to solve problems is hopeless and most especially when you throw the money of we the Nigerian masses, not your money, then it is both a crime and a sin and you will be judged for this.

MEND, Boko Haram, all this terror were caused by failure of governance and if you and the so-called northern elders continue such grave failure simply to win elections, by the grace of the Almighty, you will be surprised and shocked that insha Allah, the people will rise against you this time, and no amount of money you pay for votes will allow any of you remain in leadership, both as elected officials and as traditional leaders. Because the blood of innocent Nigerians and your violation of the tenets of God as written in the Torah, the Bible and Quran, to mete out justice on the murderers of us masses, will bring your woe.

The Bible clearly says that

Genesis 9:6 “Whoever sheds the blood of man, by man shall his blood be shed, for God made man in his own image.

Exodus 21:12 “Whoever strikes a man so that he dies shall be put to death.

And the Holy Quran is very clear by Allah’s(S) superior wisdom on the judgement for such crimes as have been committed by Boko Haram:

“O ye who believe! the law of equality is prescribed to you in cases of murder: the free for the free, the slave for the slave, the woman for the woman. But if any remission is made by the brother of the slain, then grant any reasonable demand, and compensate him with handsome gratitude, this is a concession and a Mercy from your Lord.  After this whoever exceeds the limits shall be in grave penalty.  (The Noble Quran, 2:178)

And Sayings of our noble Prophet Muhammad peace be upon him and other well-respected Islamic Scholars add:

Narrated Ibn ‘Abbas:  “For the children of Israel the punishment for crime was Al-Qisas only (i.e., the law of equality in punishment) and the payment of Blood money was not permitted as an alternate. But Allah said to this nation (Muslims): ‘O you who believe! Qisas is prescribed for you in case of murder, …… (2.178)

Narrated Ibn Abbas:  “The law of Qisas (i.e. equality in punishment) was prescribed for the children of Israel, but the Diya (i.e. blood money was not ordained for them). So Allah said to this Nation (i.e. Muslims):”O you who believe! The law of Al-Qisas (i.e. equality in punishment) is prescribed for you in cases of murder: The free for the free, the slave for the slave, and the female for the female. But if the relatives (or one of them) of the killed (person) forgive their brother (i.e. the killers something of Qisas (i.e. not to kill the killer by accepting blood money in the case of intentional murder)—-then the relatives (of the killed person) should demand blood-money in a reasonable manner and the killer must pay with handsome gratitude. This is an alleviation and a Mercy from your Lord, (in comparison to what was prescribed for the nations before you). So after this, whoever transgresses the limits (i.e. to kill the killer after taking the blood-money) shall have a painful torment.” (2.178)  (Translation of Sahih Bukhari, Prophetic Commentary on the Qur’an (Tafseer of the Prophet (pbuh)), Volume 6, Book 60, Number 25)”

So the judgement of the Almighty and most Merciful Lord is clear on this, to bring justice and closure for the victims as best possible and to discourage future perpetration of barbarism among men. You can not violate those of us who have died at the hands of these terrorists because you wish to gain favor among the elites and hope they will turn over the masses to help you all win elections. Wallahi the game you play in the democracy will bring a painful torment.

We have hunted Boko Haram. We put a reward on the head of Abubakar Shekau. Our brothers have died in the hunt for these cultists and our soldiers have died, innocent people have died. It is our right that justice must be meted upon these deviants according to Shariah.

Boko Haram themselves do not ask for amnesty, because they know that this is haram. So who is asking? Perhaps those asking are afraid of being exposed and can we say the same for you who attempts to force an amnesty on criminals who know their fate and have been tasting the reward for their wickedness already?

Offering an amnesty is a deception to the masses, innocent Muslims, Christians and others killed at the hands of these people. Who are they? Are they the law? Who and what holy book gave them the right to shoot at and toss bombs at people playing cards? Is this the law of Shariah that people playing cards or drinking alcohol should be killed? Can they show us in Quran where it states that people giving immunization should be killed?

These people have clearly violated the tenets of our noble deen spreading mischief on the land with harj and harj(killing), and giving them any so-called amnesty continues a disastrous precedence, where people believe they simply need to kill innocent people to get cash from the government. We saw only this Saturday in Bayelsa where MEND slaughtered 15 innocent policemen, simply to prove a point and get some money from the government. This is what happens when you reward murder in opposite of what the Holy Bible and Quran teaches. Then people just slaughter with impunity. We do not want Nigeria to become Rwanda.

Does the north need social welfare? Of course! This is what obtains in Europe, in Quran, in Bible. Those who can not eat, do not have clothes or shelter MUST be provided for by the government. This is the proper, urgent solution. Rather Nigerian government steals their money till they become terrorists and then a so-called amnesty is awarded so some elite businessmen among them can again steal the money. Establish a social welfare, youth empowerment and employment system starting with the poorest northern extremes of Nigeria and spread this to the entire nation as is with social security in the United States, which cuts crime in these nations. But this is not an amnesty for terrorists and the sponsors of these terrorists, with blood of innocent people on their hands. there is no mercy for these. We believe the sponsors of Boko from among you are afraid and this is why they want a so-called amnesty, so they can be free and their friends like Senator Ndume can be released from prison.

Wallahi we do not find this acceptable, and we will never forgive or forget you and Boko Haram who you wish to prove are your friends by any such gesture.

The noble Quran commands that for a life, Diyyat/Blood money must be paid if the killers life is not to be taken. Boko Haram members are to be turned in to Shariah court and if found guilty, they will be killed or will pay Diyat(Blood money) if that is demanded by their victims.

But rather the so-called northern elders are joining you to promote the overturning of Islamic law, by paying “Diyyat,” to the killers! This invites the wrath of our Lord.

How can people think of such wickedness? Who are these northern leaders? We respect Sheikh Abubakar Gumi, who clearly recommended that a Muslim officer should be put in charge of the hunt for Boko Haram, to conduct a surgical hunt, without mass murdering the community. Sheikh Gumi in the message clearly stood against any so-called amnesty for Boko Haram. This is a guided Muslim and a true Northern leader. We the MuslimsAgainstTerror.com with Sheikh Gumi and the likes of Emir of Fika, Sheikh Albani Zaria, Sheikh Nasir Mohammed Kano, we have been in the forefront of a fight against Boko Haram, while these selfish northern elders, who wish to deviate from the path of Islam, refused to secure peace in their communities, and refused to ward against the evil perpetrated by Boko Haram. Such are not leaders, because it is their duty to secure lives in their localities or to resign if they are afraid of man and not only Allah(S) their Lord and can not fight terror in their ward. Instead they do not condemn and fight Boko Haram, but they are the first to beg for “Diyya for murderers.”

Dear President, we the Muslims Against Terror remain at war with Boko Haram, their friends, apologetic and sponsors, and an amnesty will make you and the northern elders the sworn enemies of the good seeking peoples of Nigeria, because we perceive this as terrorism against the dead masses, the injured masses, the friends and relatives of those killed. And the Muslims Against terror is committed to a truthful war against terror from any quarters, Ma sha Allah.

Anything truth we have spoken is from Allah(S) and any error is ours. May Allah(S) guide us all and forgive us our transgressions. May he turn over the heads of our so-called leaders and lead them along the path of the Mustaqeem(Guided ones on the straight path).