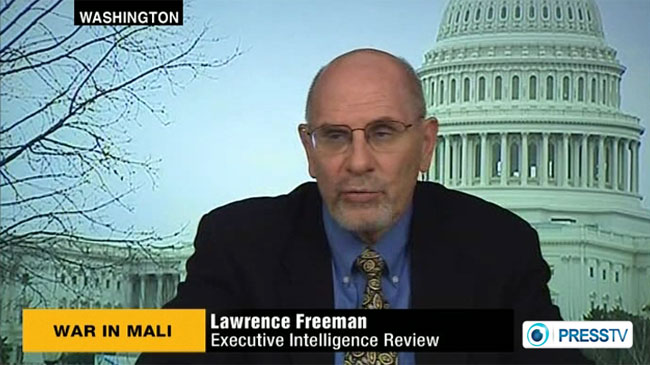 In an interview with Press TV on Tuesday, Lawrence Freeman, with the Executive Intelligence Review, described the Al Saud regime’s all-out support for the Takfiri groups operating in Syria as the “main obstacle” to a political solution to the turmoil gripping the Arab state.

“The Saudis…are hell bent on preventing a solution knowing full well that if we don’t find a solution…this will escalate to greater war and chaos in the region,” said Freeman, adding, “they’re an enemy of mankind for stalling, stopping and trying to sabotage peaceful solutions to the Syrian crisis.”

The United States has allowed Riyadh to continue fueling the “outside intervention” in Syria by funding and arming the extremists operating against the government of President Bashar al-Assad, the analyst noted.

Saudi Arabia has been a major supplier of weapons and funds to foreign-backed militants fighting against the Syrian government since the outbreak of violence in the country in March 2011.

On November 4, Syrian Information Minister Omran al-Zoubi said Saudi Arabia is responsible for the death and destruction throughout the Islamic world today, including in Syria, calling on Riyadh to stop its policy of sponsoring terrorism in regional states.

Zoubi made the remarks as US Secretary of State John Kerry visited Riyadh to soothe the Al Saud regime’s outrage at what it sees Washington’s weak commitment to regime change in Syria, especially after the US administration dropped threats of a military strike against the country.

Freeman further said, “We don’t want another regime change in Syria that causes more catastrophe, chaos and war. So we ought to shut the Saudis down, give them a rough time.”

He added that the Syrian nation should decide about its own future free from interference “by the outside forces of Saudi Arabia or even the United States.”